This weekend, I’m participating in Stacy Green’s Birthday Blast, and there’s a CONTEST involved, with multiple chances to win an $80 gift card (details below). Yay! 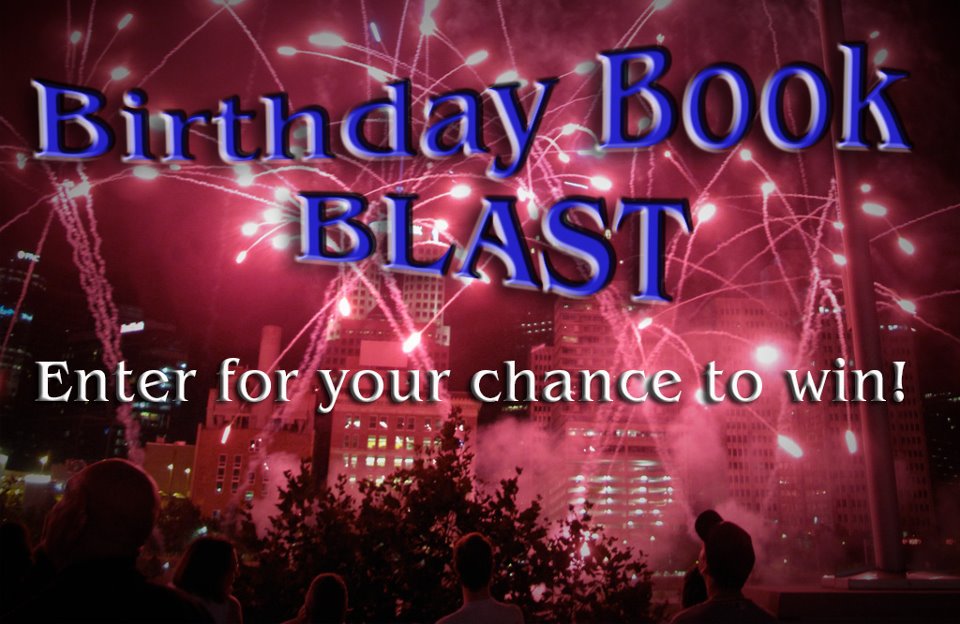 Stacy got a bunch of authors together, and many of us have put one or more of our books on sale as part of this blogfest. My latest release, An Unsaintly Season in St. Augustine, is on sale for just $.99 and I’ve also reduced the price on two other books, Family Fallacies and Celebrity Status, to $2.99. This is a limited time offer so grab up your copies soon!

But first, my post on the subject of birthdays… and big brothers!

My family didn’t make a huge deal over birthdays when my brother and I were growing up. We got a present, usually sitting next to our plate at dinner, and a birthday cake (chocolate icing for me, coconut for him), and that was about it.

Which was kind of a shame IMHO because one’s birthday is a special day that is all yours! You’re the only one being celebrated. Now I’m not faulting my mom. My parents didn’t have a lot of money when we were little shavers and I know she did the best she could. But I think there should be a bit of a hoopla about one’s birthday, especially when you’re a kid. 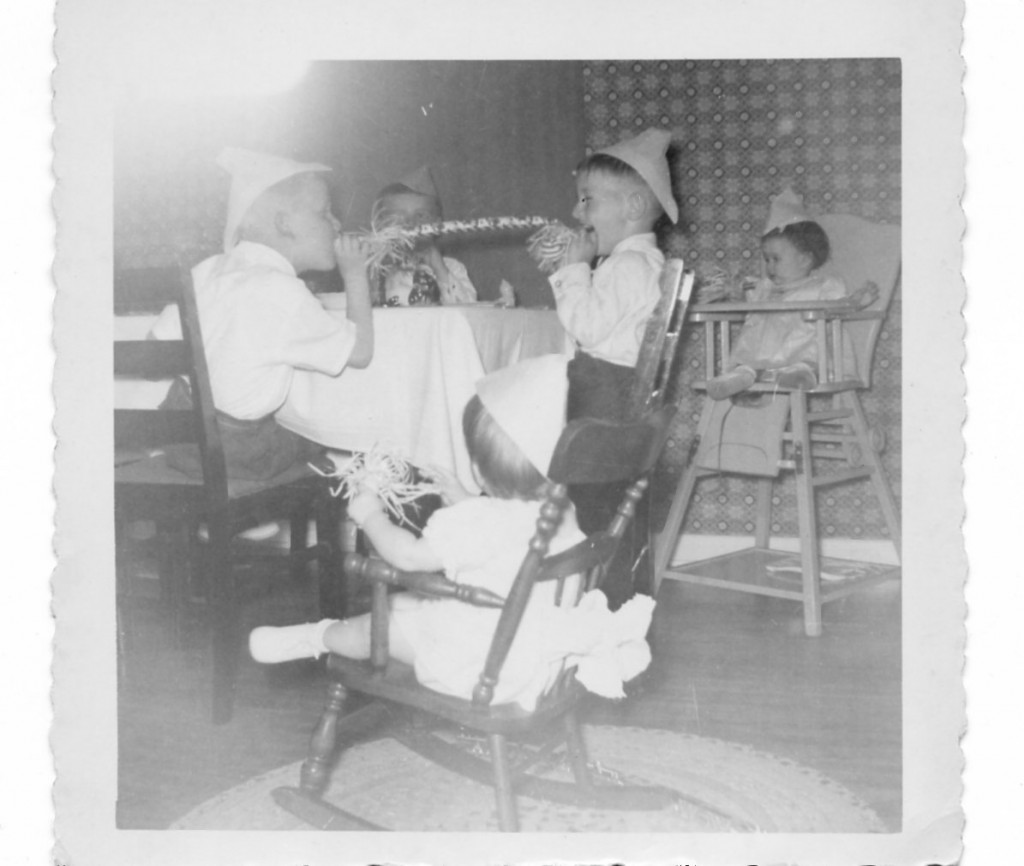 One of the few times my mother threw a party for us. This was my brother’s 5th birthday. I’m the one in the high chair.

My brother and I are now in our 60’s, so we have mixed emotions about birthdays. On the one hand, we’re damn glad we’re still having them. 🙂  On the other hand…

Since my brother’s birthday is coming up in just a few days, I decided to dedicate this post to him, and to brothers everywhere.

THINGS MY BIG BROTHER TAUGHT ME FOR WHICH I AM VERY GRATEFUL:

1.  How to say ‘brother’ as one of my first words. (No kidding, folks, he actually got in my face and actively taught me to say that word. It came out ‘bludder’ and the family story goes that I licked his face when I said it, as in “Ah, Bludder!” *tongue slurp*)

2.  How to ride a scooter. (I’ve long since forgiven him that little mishap involving a huge gash on my forehead that needed several stitches. But I’ve still got the scar… just sayin’.)

3.  How to ring the little bell on my bike handlebars with one hand while not losing control of my bike. (I’ve gotten a lot better at multitasking since then.)

4.  How to make figure-eights with my bike. (Okay, that one ended badly too; there was a concussion involved.)

6.  How to catch a softball (although I never quite mastered the football lesson) and dance the cha-cha.

8.  What to say to boys so I wouldn’t sound stupid (yeah, still working on that one, too).

9.  How to make the guys in my books sound and act realistic. (He beta reads all my books and advises on the ‘guy stuff’ even though he doesn’t particularly like to read.)

10.  How to be generous with the people you love (see above and below) and be a fiercely loyal friend.

If you’ve got a brother (or sister) you’d like to brag about, go for it in the comments below. But I won’t be able to respond until next week.

Why? Because my brother is very generously traveling with me today up to Maryland to help me paint the outside of my summer cottage up there. Even though it’s his birthday week! 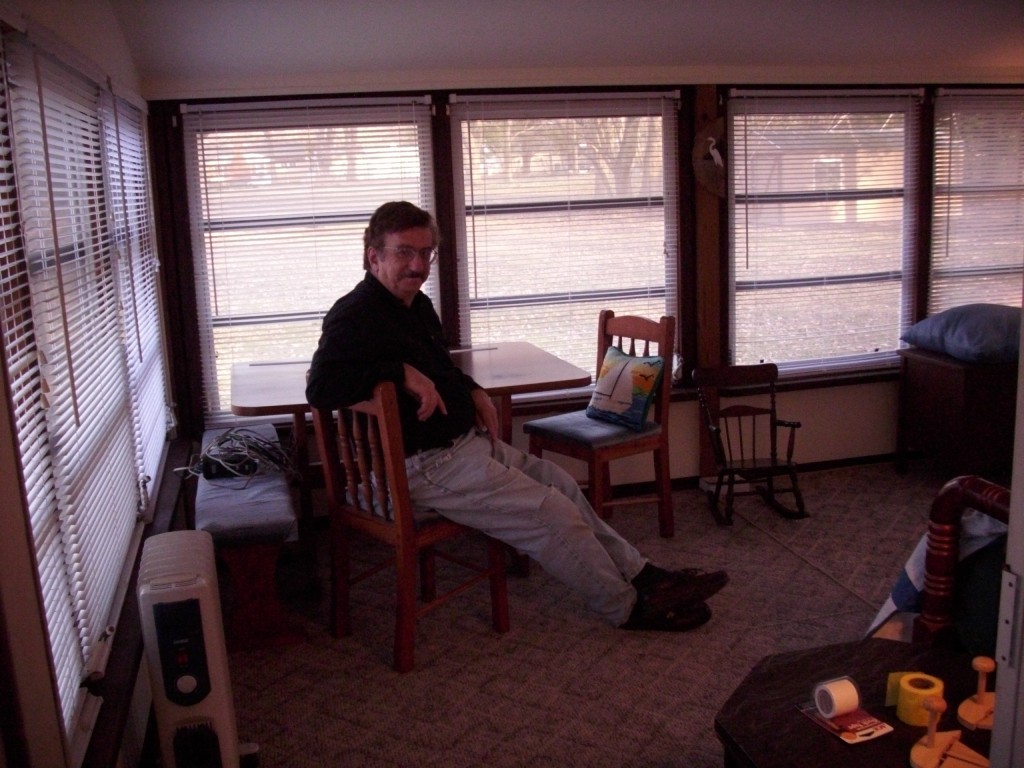 This is the last project he helped me with… finishing off the sunroom in my Maryland cottage. It turned out great!

Don’t worry. I’m gonna bake him a cake! (And I’ll post before and after pictures of the house next week.)

Now the Book Deals and Contest!

The following authors also have birthday-related posts up today, and they are all featuring one of their books!We’ve got something for everyone’s tastes.

You can enter the contest at each blog site (i.e. multiple times) plus there are bonus opportunities to enter! Prize is an $80 gift card!!!

Stacy Green’s post:  It’s my birthday, and I’ll cry if I want to!

Melinda’s debut urban fantasy, Stronger Than Magic, is just $2.99 ~ Tarian Xannon fights demons, like the rest of us. Hers just happen to be real.

Julie Day’s post:  An Aspergirl and Birthday Celebrations, or Not

Julie’s Don’t Get Mad, Book 4 of Geraldine’s Gems romance series is just $1.99 ~ Sandra follows her aunt’s advice, “Don’t get mad, get even,” develops a buff body at the gym, falls in love with a new man and learns to stand up to her estranged control-freak husband.

Catie is featuring her debut novel, Forever Road, starring Peri Jean who owes a ghost a favor and must solve a murder to pay it off ~ $3.99

Gregory is featuring Children of the Plague ~ Can teenage Lanni save her brother, and what’s left of mankind from plague infected mutants in post-apocalyptic Manhattan? ~ $3.99

Patricia Sands’ post:  Look Out! Here Comes Another One!

Patricia is featuring her new release, The Promise of Provence ~ Is home exchange in the south of France a remedy for heartbreak? ~ $3.99 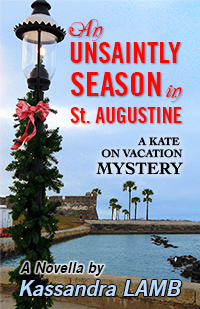 And last but not least, don’t forget that my new novella, An Unsaintly Season in St. Augustine, is on sale for just $.99.

I’ve also reduced the price on Family Fallacies and Celebrity Status, to $2.99, for a limited time only.