Today I’m talking about shame–what it is and how to handle it–and I’m also talking about Stacy Green’s new mystery, Tin God, which she just officially launched yesterday with a great Facebook party!.

Now it might seem strange to you that I’m talking about a rather heavy subject as we celebrate Stacy’s new release, especially since we just spent the weekend roasting virtual marshmallows around the campfire and telling ghost stories to honor Catie Rhodes’ new book.

Hardly seems fair, does it?  But bear with me, I have my reasons. 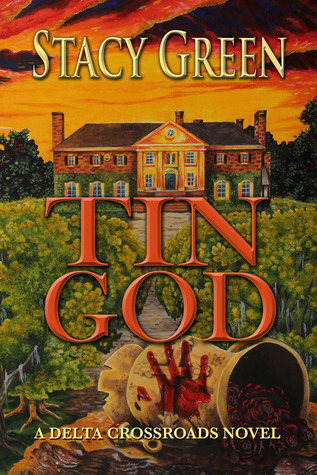 In Stacy’s book, Jaymee is a young woman struggling to make ends meet in her small hometown. Her life is made more complicated and uncomfortable by her verbally abusive father, who is quick to remind her of her past shameful transgressions whenever she has the misfortune of crossing paths with him.

Indeed, her childhood in a highly dysfunctional family, coupled with a teen pregnancy, has left her pretty beat up emotionally. But she has a mission–to get her daughter back, the child she was coerced into giving up for adoption.

This gives her the motivation to push past the shame and keep going. This is a very good thing, because the crux of the problem with shame is that it is immobilizing!

Guilt, even though it is an unpleasant emotion, has its purposes. We’ve talked about guilt here before, along with a concrete process for dealing with it. Let me give you a brief summary of that previous post. Guilt tells us our behavior is breaking a rule about how we’re supposed to behave. If we can identify (1) the behavior and (2) the rule, then (3) decide if the rule is valid or needs modifying and (4) modify the rule and/or the behavior to bring them into sync, then we can let go of the guilt. It has done its job!

Shame, on the other hand, has much less socially redeeming value. Here are some feelings in the shame spectrum: humble, self-conscious, embarrassed, ashamed, inadequate, humiliated, mortified.

The only one of those that seems valuable to me is humility–a word best defined as the awareness that we are human just like everybody else. The opposite of humble is arrogant. My mother used to say: “Remember that everybody puts their pants on one leg at a time, including yourself.” It’s not healthy to believe we are somehow intrinsically better than others, but neither is it healthy to believe we are less than others.

Jaymee struggles against those feelings of being “less than” that were instilled in her by her arrogant father. This unhealthy form of shame often comes from others judging us.

Where guilt can spur us to change our behavior, shame tends to bring on emotional paralysis. If we are shameful beings, worthless in the eyes of ourselves and others, why go on? What’s the point?

Shame and depression are second cousins, along with hopelessness.

So what can we do to overcome shame?

1.  Separate being from behavior, shame from guilt. If you’re saying to yourself, “I’m ashamed of myself because I did ______,” rephrase that to “I feel guilty because I did ______.” Then you can examine the behavior, the rule it is breaking, determine what needs modification, and move past the guilt.

2.  Ask yourself if you’ve really done anything wrong, or are you being judged for something superficial or beyond your control.

I was a ‘late bloomer.’ That’s euphemism-speak for flat-chested until you’re fifteen. I was the last of the girls in my school to get a ‘training’ bra (I always wondered what we were in training for. When we graduated from bra boot camp, would we move on to, say, straight jackets?)

The kindest thing I was called by the boys (and some of the girls) was “ironing board.” As an excruciatingly self-conscious fourteen-year-old, I was mortified. My mother kept saying, “Late roses bloom longer.” I had no clue what she was talking about… until I attended my five-year high school reunion.

The girls who had been voluptuous at fourteen were now fat, and I was sleek and svelte (ah, those were the days!). And those poor gals were excruciatingly embarrassed by their weight gain. Not only did it hit me then that this was what my mother had meant, but I also got it that these women were doing the same thing I had done in high school. They were taking to heart the judgements of others, and harshly judging themselves, for something that they did not have total control over and it was something that should not be a defining factor in their worth.

3.  Focus on those people who believe in you, not those who tear you down. Jaymee, in Stacy’s book, does this. She tries to focus on the people who love and support her, like her best friend, whom she still mourns four years after her senseless murder. And her employer, a well-to-do socialite who has promised to help her find her daughter. Even when this woman is found dead in her historic mansion, Jaymee does not give up on the search, nor on herself.

How about you? Any thoughts on how to fight shame and keep it from stopping us in our tracks?

While you’re pondering that,check out Stacy’s synopsis of her book!

Getting pregnant as a teenager and being coerced into giving her baby up for adoption left a festering scar on Jaymee Ballard’s life. Trapped by poverty and without many allies, Jaymee nearly gives up hope of getting her daughter back after her best friend is murdered. Now, four years later, a wealthy woman with legal connections hires her as a housekeeper, and Jaymee gathers the courage to seek her help. But Jaymee’s last chance ends up in a puddle of blood in one of the historic antebellum mansions in Roselea, Mississippi.

I just murdered your wife…again.

An unsigned letter consisting of six horrifying words turns Nick Samuels stagnant life upside down. Stuck in emotional purgatory since his wife’s unsolved murder four years ago, Nick is about to self-destruct. The arrival of the letter claiming credit for his wife’s murder and boasting of a new kill sends Nick to Roselea, where he and Jaymee’s worlds collide.

Jaymee and Nick realize exposing the truth about her daughter’s adoption is the only way to solve the murders. Up against years of deception, they rush to identify the killer before the evidence–and Jaymee’s daughter–are lost.

But the truth doesn’t always set the guilt-ridden free. Sometimes, it destroys them.

I have read this book and it is great! It is available now of Amazon!

14 Replies : Leave a Reply →
Misterio press is dedicated to producing top quality books for mystery lovers. Whether you enjoy a traditional mystery or a splash of paranormal on the side, we aim to please. So, please browse our current mysteries and check back for new additions!