I love being a historical mystery writer. Though it means additional research time as well as longer gaps between book releases, I run across fascinating stuff. I enjoy weaving the plot of a mystery into the historical world. I hope you’ve been pleased with the results so far!

I’m here today to announce my newest release, Unseemly Haste (book 4 of the Concordia Wells Mysteries). It’s set in the summer of 1898, as my characters make their way from New York to San Francisco aboard a Pullman sleeper car train. LOTS of research. Want to see some of the cool things I ran across?

Planning the journey: the route from New York to San Francisco 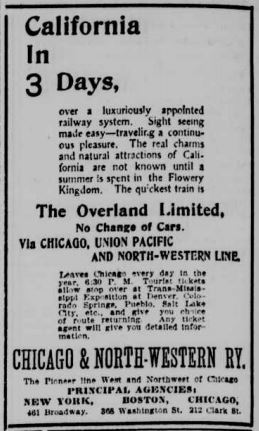 The New York Tribune, May 21, 1898. ChroniclingAmerica.loc.gov

Railway mergers, shared use agreements, and the standardization of track gauge, platform configurations, etc, made cross-country travel by rail easier than ever by the 1890s. The three-day trip covered 3,270 miles. For the route my characters took, four different railways were involved: the Pennsylvania RR, the Pittsburgh, Fort Wayne, and Chicago RR, the Central Pacific RR, and the Union Pacific RR. According to Appletons’ General Guide to the United States and Canada: Western and Southern states (D. Appleton and Company, 1889), the cost of the Chicago Limited Express (sleeper compartment included in the price) from New York to Chicago was $28, then from Chicago to San Francisco, aboard the Overland Limited, $72.50.

All aboard! Dining and Recreation: 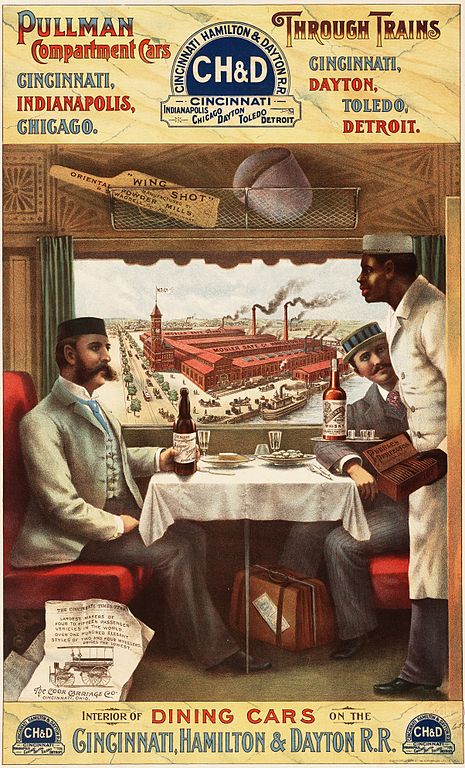 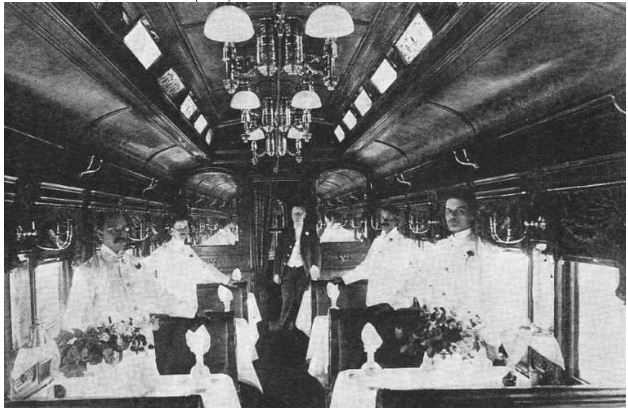 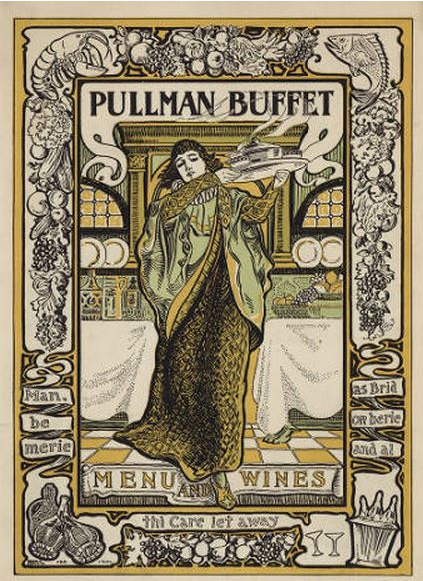 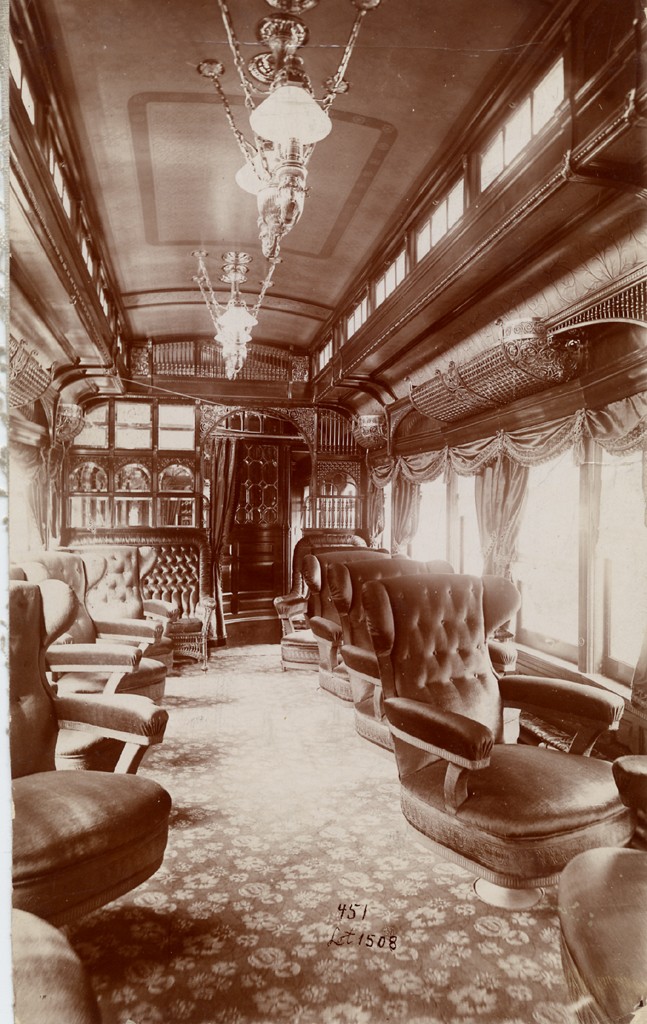 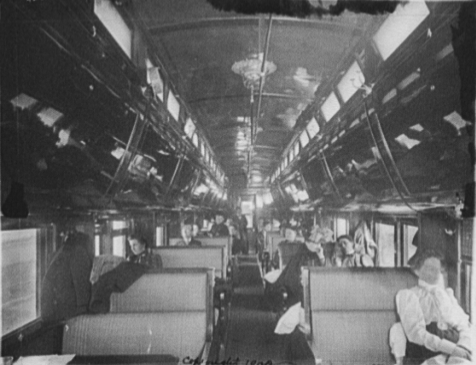 The interior of a Chicago and Alton Railroad Pullman car circa 1900. Photo by Detroit Publishing Co, c. 1900. Library of Congress. 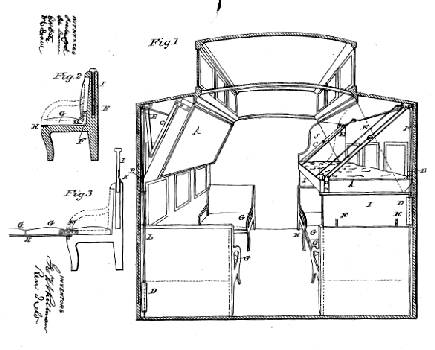 For those who could afford it, entire private cars were available, as pictured below. (Less expensively, private compartments within a railway car were also available). 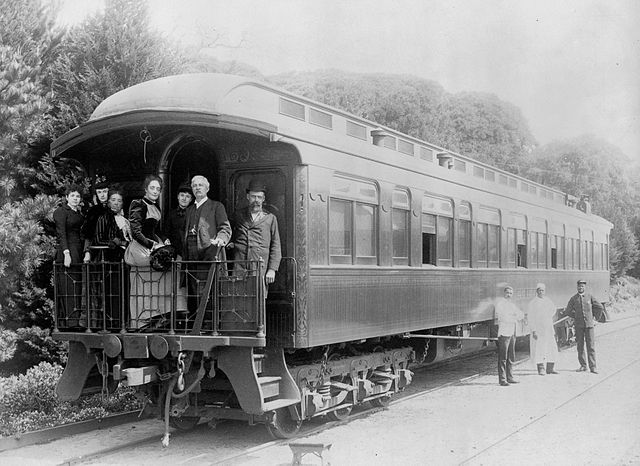 Henry M. Stanley and party standing on back of train at Monterey, California, March 19th, 1891, porters standing at side of car. Library of Congress.

Pullman porters at the time were exclusively African-American, and were referred to by passengers and industry officials alike as “George,” no matter their given name. Working conditions and pay were exploitatively poor. They finally unionized in 1925, under the Brotherhood of Sleeping Car Porters, led by A. Phillip Randolph. According to the A. Phillip Randolph Pullman Porter Museum:

The porters had tried to organize since the beginning of the century. The wages and working conditions were below average for decades. For example, the porters were required to work 400 hours per month or 11,000 miles—whichever occurred first to receive full pay. Porters depended on the passengers’ tips in order to earn a decent level of pay. Typically, the porters’ tips were more than their monthly salary earned from the Pullman Company.

It was certainly a thankless job, which I kept in mind when creating Jonas, the porter who features prominently in Unseemly Haste.

Which brings me to my announcement:

Book 4 of the Concordia Wells Mysteries 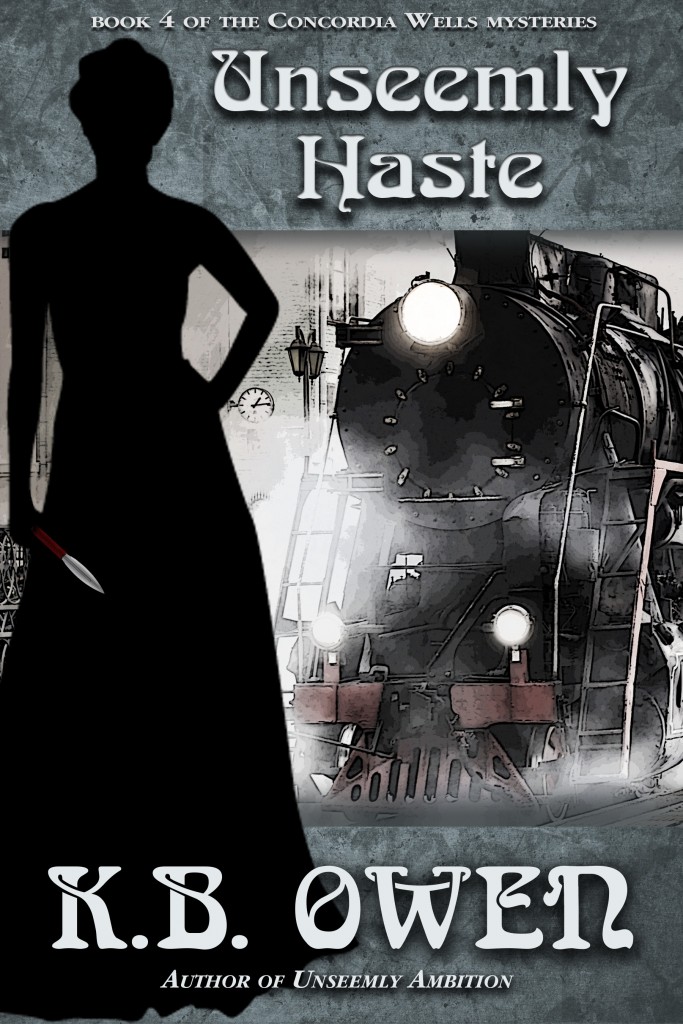 Murder aboard the Overland Limited…

It is the summer of 1898. Professor Concordia Wells is eager to accompany her friend, Pinkerton detective Penelope Hamilton, on a cross-country train trip to San Francisco. Breathless vistas and exciting locales will be a welcome change from a fiancé impatient to set a wedding date and the threat of revenge from the remaining Inner Circle members back in Hartford.

But Concordia should know there is no such thing as a free ride. When the Pinkerton Agency switches assignments at the last minute, she and Miss Hamilton both have jobs to do. Fellow passengers prove to be both help and hindrance: a lady reporter in hiding, a con man, Chinese acrobats…and a corpse or two. Then there is the handsome gentleman with the dark hair, green eyes, and a secret agenda of his own. Good thing Concordia is an engaged lady. Or is it?

Available now at these retailers (buttons below are hyperlinked):

Have you ever traveled via sleeper train? Do you wish you had the chance? I’d love to hear from you.

Posted by Kathy Owen (aka K.B. Owen). Kathy is a former English professor with a PhD in 19th century British literature. She is a mom to three sons and writes the Concordia Wells series of historical mysteries. Her twitter handle is @kbowenwriter, or you can connect with her on her Facebook page.