For Christmas this year, my brother gave my husband a day’s worth of help organizing his study. Now you might think that a strange gift, but it was on the hubster’s wish list.

As I’ve mentioned before, hubs is a random thinker. While being a random has its strengths, step-by-step planning and organization are not among them. Whether one is a random or sequential thinker seems to be innate, although I don’t think any definitive research has been done on this yet. (For more on randoms vs. sequentials see my post on the subject.)

Since where we land on the random-sequential continuum seems to be inherited, that means we probably have one or more parents who are like us. In my husband’s case, both of his parents were fairly random, if the level of neatness, or lack thereof, in their homes is an indicator (which it usually is).

The first time I visited my mother-in-law’s home, I thought, “Okay, this explains a lot.” Her house was clean from a hygienic standpoint, but it was far from neat.

So in my husband’s case, he got a double whammy of nature and nurture. Kind of stacked the deck against him. 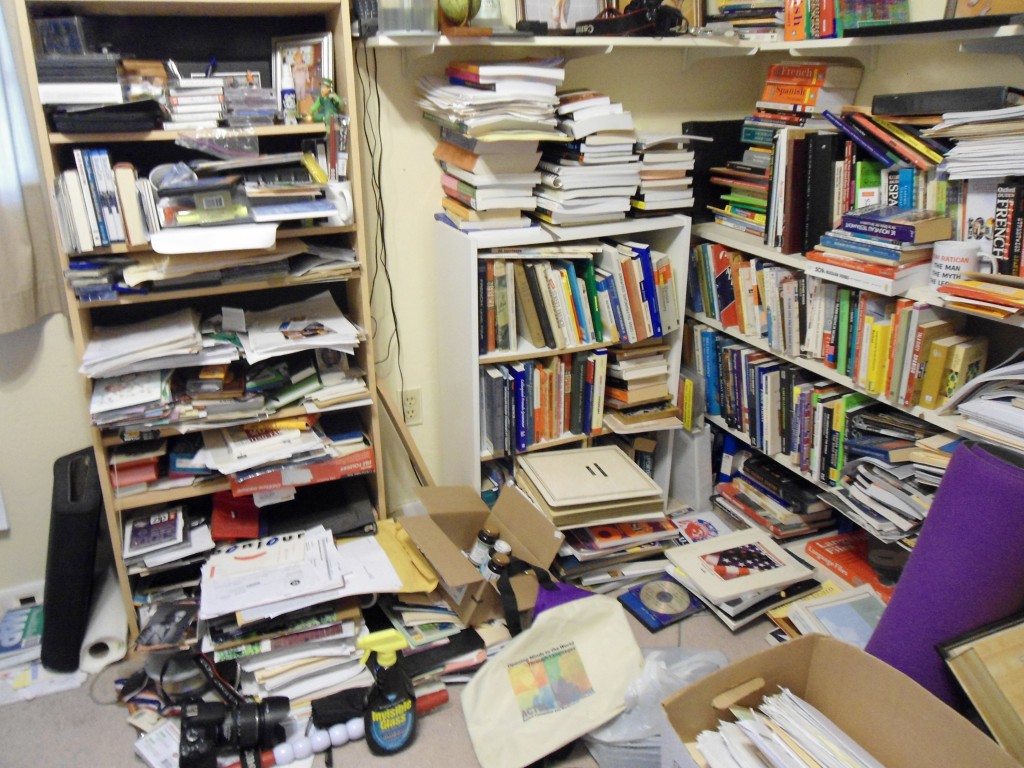 Hubs’ study before the Big Clean-up

So then the question becomes: can one unlearn early lessons, especially if nature is also working against you?

I lean much more toward sequential, as did both my parents. But as kids we had bedrooms on the second floor, and my mother rarely climbed the stairs to inspect our rooms. So because I could get away with it, I tended to be a slob.

This carried over into young adulthood. I wasn’t a total slob, but I was hardly neat either. I had a chair in the bedroom on which I flung my clothes at night. Eventually most of the clothing I owned would be on that chair (or it would fall over from the weight 😛 ).

So then I would be forced to sort through the stuff to either hang up what was still wearable or put things in the hamper. This would take at least a half hour to forty-five minutes to do. Of course, I put it off for as long as possible, which meant the chore was even bigger by the time I did it.

One day, it dawned on me that life would be easier if each evening, I either hung up my clothes or put them in the hamper right then. So I started doing that. Eventually I became neater in general, because I saw the value in cleaning up at the time rather than having a bigger chore to do later.

It wasn’t all that hard to break the habit of being a slob, because I’m a sequential thinker.

For randoms, learning to be neat is very, very hard. I can’t begin to tell you how many times my husband has vowed to “clean up my room.” He’d start out with good intentions, but after several days of effort and quite a few bags of trash and recyclables being removed, his study would look pretty much the same. Because what was left was still randomly scattered all over the place, including on the floor.

Thus the request for help on his wish list. My brother not only helped him get everything off the floor and in boxes, stacked neatly on book shelves, but he gave him some advice on how to keep it that way. Now the study looks like this: 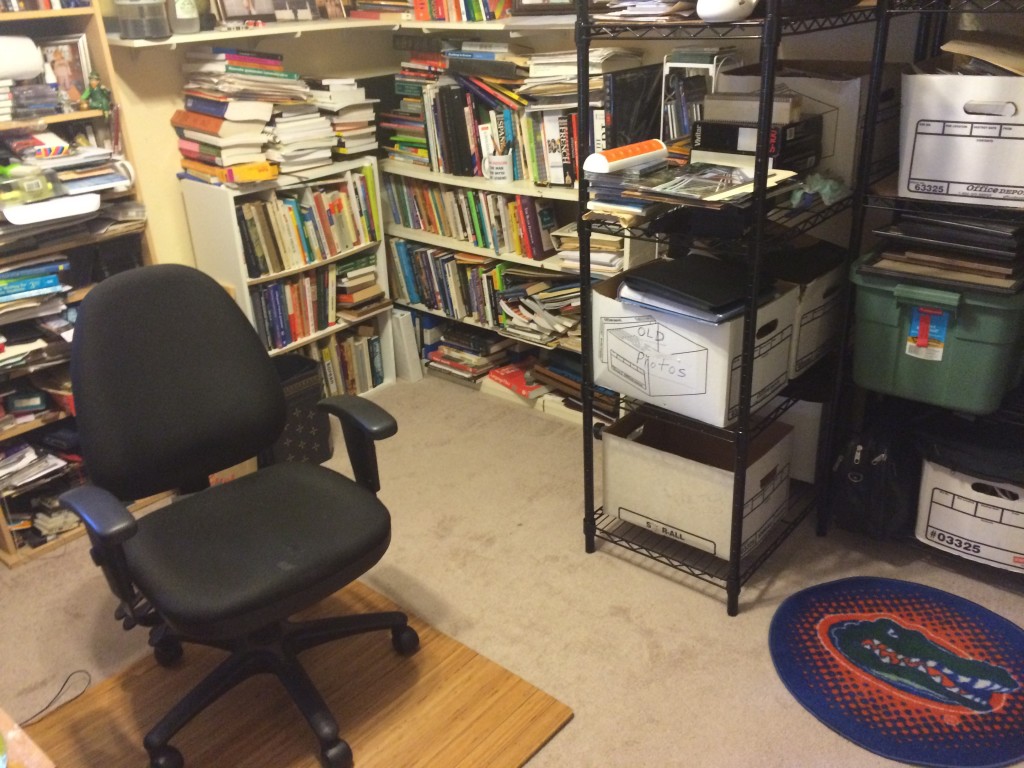 He really likes having a neat and orderly place to work, and he has vowed to keep it that way. It’s been a little over a month since the big re-organization and so far, so good. But neither he nor I are taking it for granted that this will last.

Why are we so pessimistic? Because old, ingrained behaviors are hard to change and there’s that whole nature thing working against him.

So what can couples do if they find themselves on opposite ends of the neatness-messiness spectrum? The slobby person may or may not be able to change their behaviors, but there are some things that can help keep the relationship stable.

First, we need to learn to not take it personally. My husband doesn’t leave his shoes in the middle of the floor to defy me or because he expects me to pick up after him. Indeed, I’m not even in his thoughts when he takes those shoes off and leaves them there.

Indeed, the SHOES aren’t even in his thoughts once they’re off his feet. That’s the problem! When he’s done with an object, it lands wherever he last used it.

On his side of things, he doesn’t take it personally when I remind him to pick up stuff or clean up his bathroom. He admits that he’s a slob and knows it’s not the ideal way to be.

Years ago, we hit on a great solution. We established slob zones. In each room in the house, there is one section that is his to slob up to his heart’s content–one corner of the dining room, his dresser in the bedroom, beside his chair in the family room, etc.

So he leaves his shoes in the middle of the family room floor; I toss them on top of the pile next to his chair. He leaves his mail on the kitchen counter; I toss it in the pile of papers on his end of the breakfast bar.

Once we established the slob zones, we didn’t argue all that much anymore about his slobby ways. And through the years, he’s gotten better at keeping the slobbiness contained to those zones.

How about you? Is your significant other neater or messier than you are? How do you deal with it?