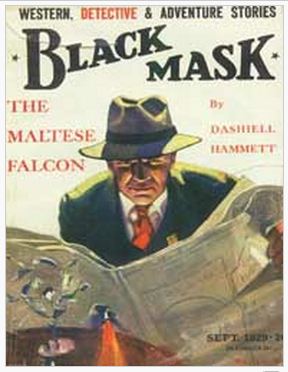 Hi, K.B. Owen here, to talk about the “hard-boiled” detective story subgenre and one of my favorite examples of that style, The Maltese Falcon. (Yes, I’m fully embracing the irony of a cozy mystery writer discussing such a rough-and tumble fictional world. If you really want your mind blown, check out my hard-boiled short-short fiction piece a few months ago on Laird Sapir’s blog).

This will be in two parts: today, I’ll talk about the genre in general and some background on Sam Spade’s world; next Tuesday, I’ll talk about how Dashiell Hammett’s background (hint: he wrote what he knew) came to be linked so closely with his creation, and the reaction to the novel’s publication.  I hope you can join me for both parts!

What is hard-boiled?
What we call “hard-boiled” (a term first coined by Raymond Chandler) is crime fiction that’s characterized by a hard-drinking, cynical private eye with his own moral code, a sexy dame with lies even longer than her legs, and an emphasis on action over contemplative deduction. Although the detective-hero is street-smart and savvy in the ways of the criminal underworld, he solves the case more with his fists than by sitting in a corner, smoking shag tobacco and thinking over the puzzle.

Some folks consider hard-boiled and noir interchangeable terms, but critic Otto Penzler gives a great explanation of why this isn’t the case: Noir Fiction is About Losers, Not Private Eyes.

Only in America
The hard-boiled subgenre is a uniquely American creation, arising from the frontier heroes, larger-than-life loners, scoundrels and criminals of U.S. history.

American literary tastes of the early 20th century had been conditioned by the Leatherstocking Tales of James Fenimore Cooper. The hero, Natty Bumppo (I kid you not), had moral virtue and fantastic visual powers by which he could read broken twigs and faint footprints to seek out the enemy.  Rather than society’s rules, he followed his own code of ethics.

American readers were interested in frontier adventure tales, stories with a romantic interest, and those with a residual sense of the “eye for an eye” justice of their Puritan forefathers. They avidly read stories serialized in magazines – in 1922 alone there were over 20,000 magazines published – and the magazine detective story format was emerging as a very popular medium. The enormous following of the late 19th century dime/pulps (even though the stories were rather primitive) also encouraged publishers of the early 20th century to promote this sort of fiction.

A Classic Example: The Maltese Falcon (1930), by Dashiell Hammett 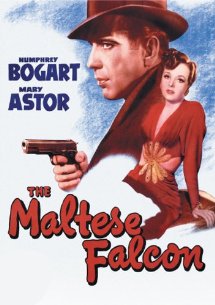 Of course, many of us are familiar with the 1941 film, starring Humphrey Bogart as Sam Spade. But there’s much more to the story than what we see in the film version.

Since the novel is set in 1920’s San Francisco, let me give you a little background about that time and place:

San Francisco was the metropolis of the West – a focal point of immigration, mining, industry, and export.

After the passage of the Volstead Act (otherwise known as Prohibition), the city became a major port of entry for illegal liquor. Speakeasies paid off local authorities in free liquor; networks of rum-runners stretched inland; and houses of prostitution flourished. Apparently many San Franciscans considered Prohibition an incentive to commerce.

The Bay area during this time attracted German, Italian and Chinese immigrants. In fact, an entire Chinese society, complete with criminal gangs, holy men and a social hierarchy, developed in a twenty-square-block area of downtown SF.

In terms of law enforcement, corruption abounded. Many of the cops, D.A.s, and city officials were either on the take or looking to advance themselves by whatever means necessary. This mindset is a prominent part of the world of The Maltese Falcon. Private eye Sam Spade doesn’t dare trust anyone but himself in such a world.

Next week, we’ll talk about Hammett the author, and how The Maltese Falcon was received at the time.

Are you a fan of hard-boiled detective fiction?  Have you seen the Bogart film?  I’d love to hear from you!

Until next time,
Kathy

Posted by Kathy Owen (aka K.B. Owen). Kathy is a former English professor with a PhD in 19th century British literature, and the author of Dangerous and Unseemly, A Concordia Wells Mystery. She is currently raising three boys and working on Books 2 and 3 in the Concordia Wells mystery series.

23 Replies : Leave a Reply →
Misterio press is dedicated to producing top quality books for mystery lovers. Whether you enjoy a traditional mystery or a splash of paranormal on the side, we aim to please. So, please browse our current mysteries and check back for new additions!