I’d been to two conferences this year and wasn’t about to attend another. Then this happened. 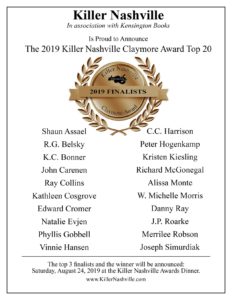 Since I last attended, Killer Nashville has moved from Nashville proper to a hotel in an industrial park in nearby Franklin. No pedal pubs hooting by on the street! No sneaking out to hear music! I also found this new hotel/motel disconcerting with elevators where you’re on display like a bug. No fluffing your hair or wriggling in your dress to prepare for a grand entrance. 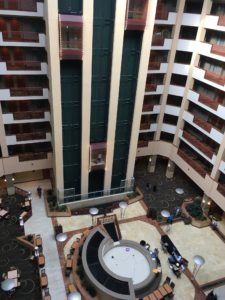 Even though the outside temperatures weren’t bad for the end of August, the conference rooms were cold enough to chill wine. Fortunately, when packing, I had heeded my friend Mary Feliz’s sage comment that there’s only one temperature at conferences. Hotel temperature. Still, I could have used warmer clothes!

Enough whining. I finally met face-to-face two authors I’ve worked with and known for years, Paula Benson and Maggie Toussaint. Because of them and the Sisters in Crime Guppies Chapter, I immediately found my tribe. 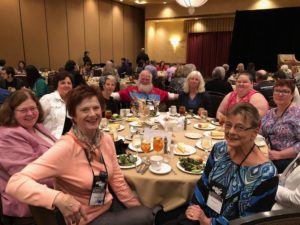 The Guppies table at Friday lunch. Out-going president Debra Goldstein was there, as well as three Silver Falchion winners: Maggie Toussaint (front left), who won in Sci-fi/Fantasy/Horror; Carmen Amato (out of frame), who won in Short Stories; and Bradley Harper, who won for Mystery. Of course, the table also included moi, a Claymore finalist, and the young woman in red who solved KN’s staged crime scene.

Bradley Harper, the gentleman at our table, not only won the Silver Falchion for best mystery, but also co-hosted my favorite panel, How Autopsies Really Work. The presentation was full of grist such as surgeons often sign bullets they remove (as part of the chain of custody). In Germany, Medical Examiners don’t use the Y incision but rather a straight line because there are no open casket funerals in Germany.

A highlight at Killer Nashville is the staged crime scene. Attendees get to act as CSI and try to solve what happened. I didn’t win, but the killer was in my top two suspects. 🙂 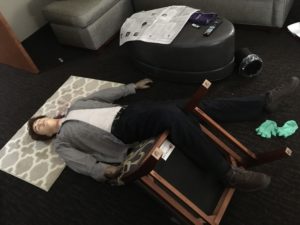 The crime scene covered the entire hotel suite and was quite complex. To grasp the crime, one also had to listen to many taped interviews.

Because this was my second time as a Claymore finalist and my second time at the conference, Clay Stafford, the founder, assigned me plenty to do: three panels, many signing slots, and a position as presenter at the Awards Banquet. 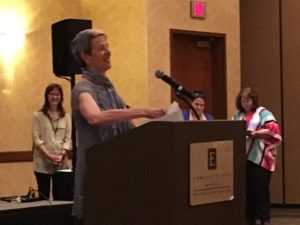 But the stars of Killer Nashville were, of course, Joyce Carol Oates, Alexandra Ivy, and David Morrell. If you’ve never seen Joyce Carol Oates, she’s a wren-like woman with a great deal of self-possession. Because I was the first presenter, I was able to sit in Clay Stafford’s banquet chair for a bit and rub shoulders with greatness, the three stars all lined up at my side. But my favorite star experience happened during one of my many forays outside to warm up and to breathe some real air. On the weekend, the industrial park was completely deserted. I was the single sole walking about. That is, until Joyce Carol Oates came walking toward me. I figured she was out there for some peace, so we passed wordlessly. It was enough to catch her fleeting aura.

How about you? Have you ever had occasion to attend a conference? Which are your favorites and why? Any Joyce Carol Oates experiences?

Posted by Vinnie Hansen. Vinnie fled the howling winds of South Dakota and headed for the California coast the day after high school graduation. Still sane(ish) after 27 years of teaching English, Vinnie is retired. In addition to writing, she plays keyboards with ukulele bands in Santa Cruz, California, where she lives with her husband and the requisite cat. She’s the author of the Carol Sabala Mystery series, and LOSTART STREET, a cross-genre novel of mystery, murder, and moonbeams. Her short fiction has appeared in a variety of publications and anthologies, with four publications this year. Her latest is a caper story in the Sisters in Crime Guppies’ anthology, Fishy Business. 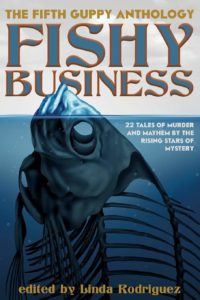 We blog here at misterio press about twice a month, usually on Tuesdays. Sometimes we talk about serious topics, and sometimes we just have some fun. Please sign up via email (upper right sidebar) to follow us, so you don’t miss out on any of the interesting stuff, or the fun! (We do not lend, sell nor otherwise bend, spindle or mutilate followers’ e-mail addresses. 🙂 )