Whether I consult my reference book Deadly Doses or tour San Quentin, all of my mysteries involve research. Death with Dessert, the newly re-released fifth book in the Carol Sabala series, required the most difficult research of the seven books.

Death with Dessert contains an immigration sub-theme. Illegal immigration from Mexico to the United States is a complex topic. In my long career as a teacher I worked with immigrant families and heard many of their stories. But I still spent many hours reading about the Operation Wetback program of the 1950s, watching documentaries, and talking to workers from Humane Borders and the Mexican Consulate in Tuscon. 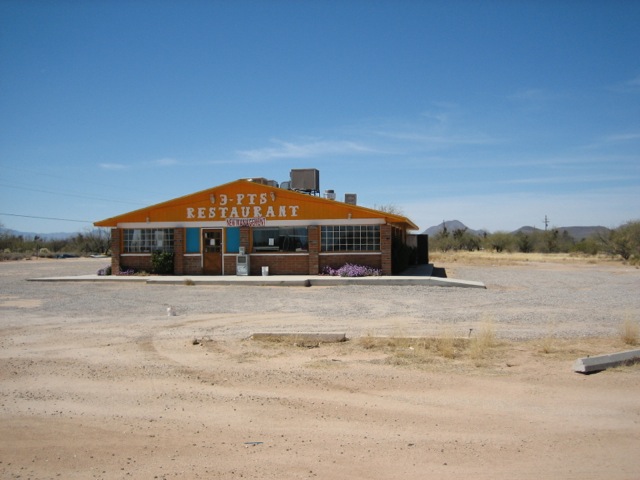 However, there’s no substitute for personal experience. I needed to see my immigrants’ path in a more earthy way.

So I flew to Tuscon, rented a car, and drove Highway 286 from Three Points down to the tiny border town of Sasabe. I stopped along the way to smell the desert, to note the plants and landscape, and to listen to the sounds (mostly border patrol vehicles driving up and down this corridor, ATVs jouncing in the backs of their trucks).

I noted the arroyos under clumps of mesquite, great for hiding from aerial surveillance, but deadly in a flash flood. I imagined walking this beautiful, desolate countryside, the scorpions and rattlesnakes and lack of water. 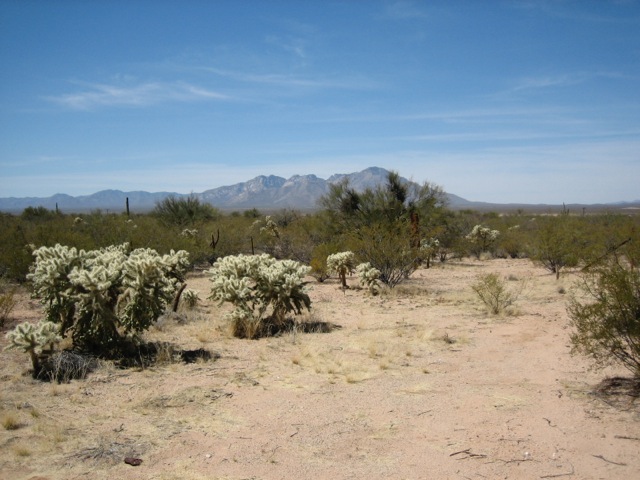 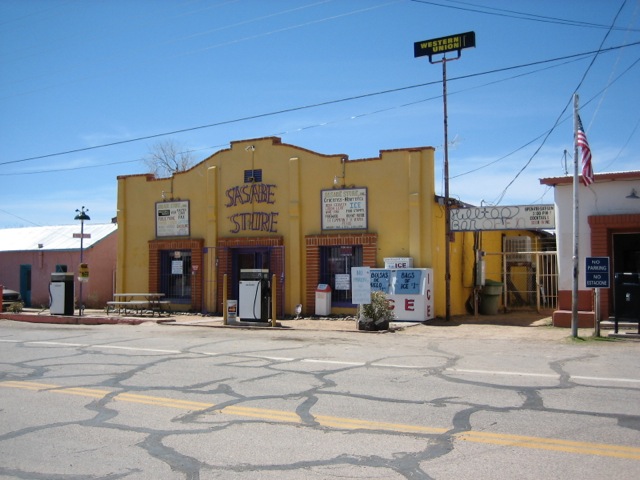 Downtown Sasabe, just over the border.

I returned from my trip more confident that I could create the illegal immigrants’ experience in a convincing way. As the adage says, “Write what you know, or know what you write.”

At the start of Death with Dessert, my private investigator Carol Sabala launches on a mission to track down her missing father in Mexico. I set Carol’s destination as Zihuatenejo, because my husband and I had spent many winter vacations there. But once I decided the town would be featured in my book, instead of photographing the sunsets, I turned my camera toward policemen and street scenes. 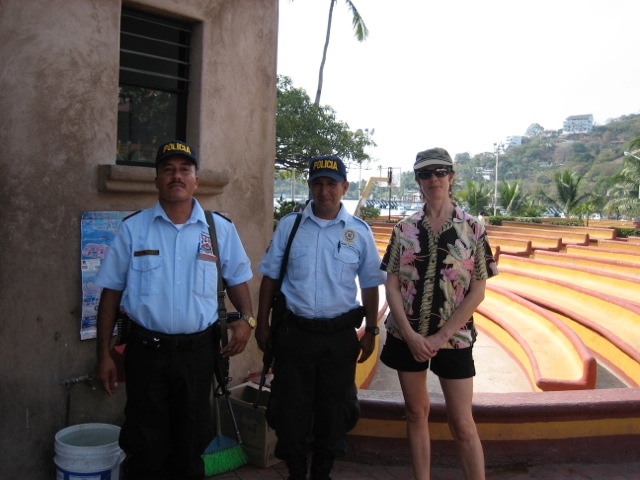 My side trips in Zihuatenejo also took a turn. Because Carol Sabala spends time in a Mexican jail, I had to visit one. My husband, ever the game one, accompanied me to the El Centro de Readaptación Social. 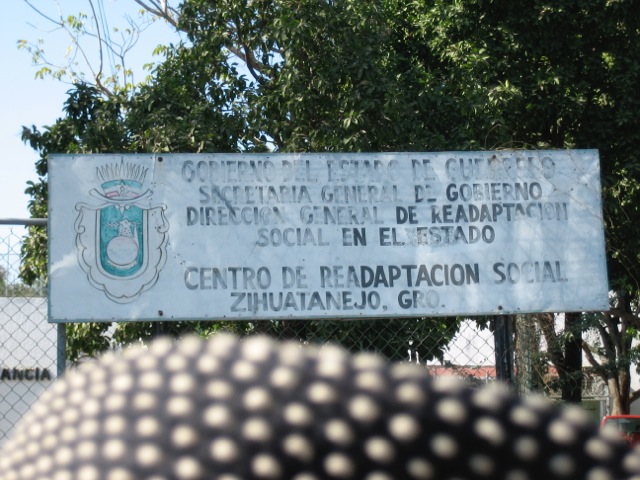 The barren lot outside the facility teemed with police officers, many armed with sub machine guns.

I’d heard about the police in the state of Guerrero—that they worked 24-hour shifts and were paid horribly, that they were corrupt and hated, that they had disappeared people during the Guerra Sucia, the Dirty War.

Nonetheless, I approached the “office,” a cubicle open to the air in the stucco building. It contained a battered desk, a manual typewriter, and not much else. In my limited Spanish, I explained to the officer that I was a mystery writer and asked if I could tour the jail. I have done several jail tours in the United States, so this did not seem like an outrageous request to me.

The officers thought differently and regarded me with immediate suspicion, asking if I was a Human Rights Watch activist, and wanting to see my passport.

Fortunately I had left my passport in our hotel, otherwise they might have confiscated it. As it was, officers frog-marched us to the curb where a taxi mysteriously appeared to transport us back to where we belonged.

I didn’t get inside the jail. If I had, my view probably would have been from behind bars! The police department’s worry about Human Rights Watch hinted at the conditions inside. My imagination rounded out the picture.

Please check out Death with Dessert, and I have a giveaway going on over at Goodreads. Today’s the last day so hop on over there and sign up. Hope you win a copy! 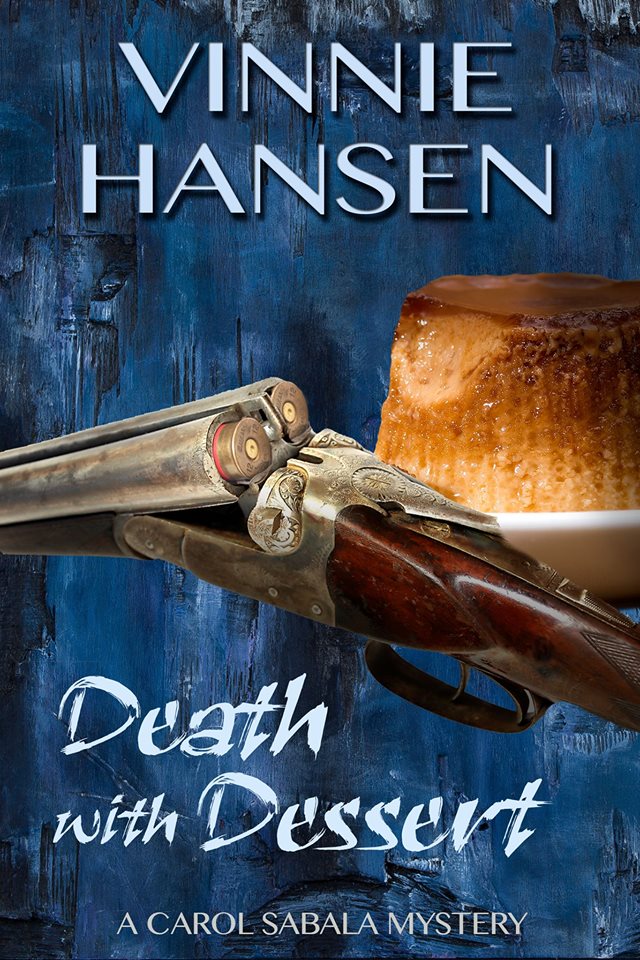 A dead mother. A missing father. A mysterious man.

They all spell trouble for private investigator Carol Sabala. When Carol’s mother dies unexpectedly, Carol is left with no family—only money, grief, and an envelope. Her mother has charged her with a mission: deliver the envelope to her long-lost father.

Enroute to Zihuatanejo, Mexico, to track down her father, Carol encounters the alluring Mark Escalante, who snares her in a deadly pursuit of his own.

AVAILABLE NOW on AMAZON and through SMASHWORDS