There are many things about human nature that never cease to amaze me. One is how short some people’s memories are. All too many of my friends and acquaintances seem to have forgotten what it is like to be young.

I wince ever time I hear one of my age-mates complain about “these kids today,” using much the same language that our parents used to complain about us when we were young adults.

When I taught college, I certainly encountered irresponsibility, but I met a lot of responsible young people as well. But they don’t stand out in the crowd. They’re just going about their business, doing what they are supposed to be doing. The irresponsible ones get noticed because they’re screwing up. 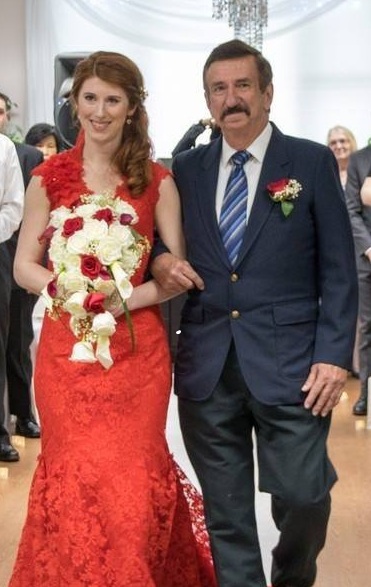 My brother escorting his little girl down the aisle.

All this is on my mind right now because I just got back from a trip up north for my niece’s wedding. And overall, I was pretty darned impressed with the young people involved.

My niece is an extrovert extraordinaire. She has a high-pitched voice and a bubbly personality, and people sometimes underestimate her. I can relate. I shared the same traits at her age (still do to some extent, although some mellowing has occurred), and I struggled with being taken seriously.

She did a great job of planning and executing this wedding (with no professional wedding planner involved). It was a particularly tough task since they were attempting to blend two cultures. (Thus the red dress which is traditional for Chinese brides.)

The groom had the good sense to provide a sympathetic ear when she needed to vent, but he otherwise stayed out of her way. Both mothers were sweetly but firmly told that she had it under control, thank you very much.

And she did. The whole thing went off with only a couple of minor glitches—both unforeseeable and neither all that earth-shaking. 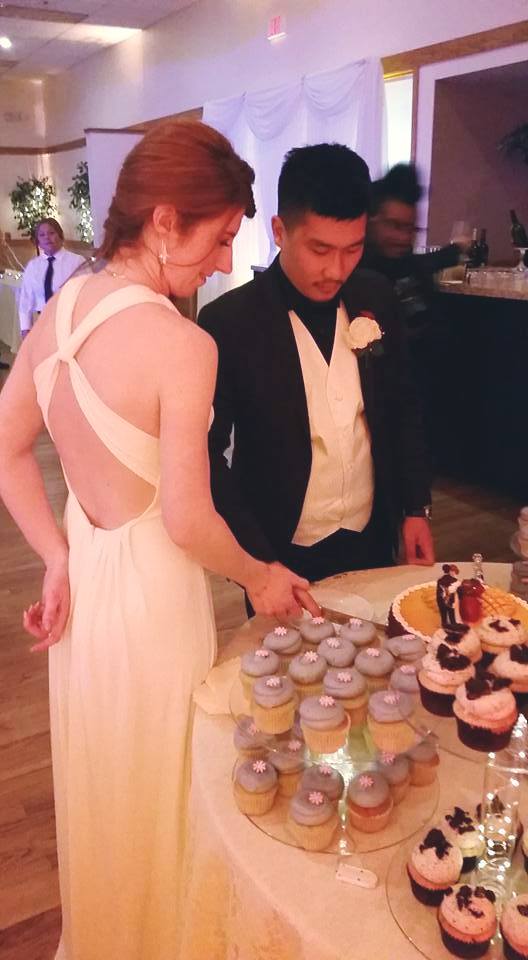 Bride and groom cutting the main cake, with cupcakes stacked around.

One was when the make-up lady accidentally dropped some makeup on the bodice of the maid-of-honor’s dress. There was a flurry of discussion about what to do, until both her sister and I reassured her that the spot was barely visible and probably wouldn’t be noticed if one didn’t know it was there.

This wonderfully mature young woman then shrugged and went back to the many duties my niece had assigned to her, from making sure the cupcakes were stacked appropriately on the cake table in the reception hall to keeping my niece’s rebellious train pointed in the right direction.

She didn’t seem to give the tiny grease spot another thought, which impressed me, since at her age, I would have been totally self-conscious all evening. 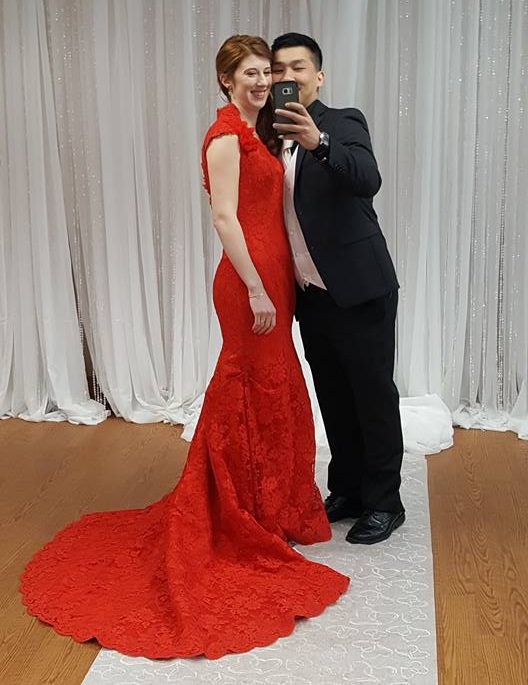 That train had a mind of its own!

That was one of the things I noted as the reception progressed. These young people didn’t take themselves too seriously, but they did take their responsibilities seriously.

There were plenty of high jinks and clowning around (especially over at the “photo booth”) with the occasional ear-splitting squee. But none of them, that I could tell, got sloppy drunk.

I’ve watched many of these youngsters grow up, and I’ve got to say that I couldn’t be prouder of them. 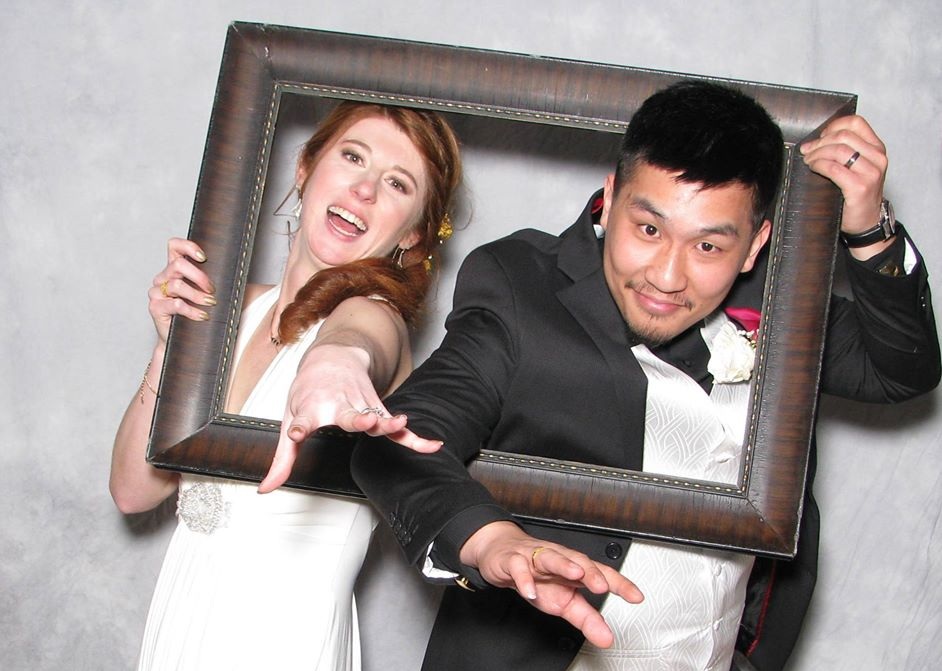 Bride and groom in the “photo booth.”

Adjusting to adulthood isn’t easy, and I wish more of my generation would cut youth some slack. And pay closer attention to the ones who are doing it right, instead of the ones who are messing up.

As one of my young Twitter peeps recently tweeted:

“Adulting is like looking both ways before crossing the street and then getting run over by an airplane.” – unknown

I think my niece would agree. I’ve heard her make similar comments.

Although I sometimes wonder about the sanity of some of my age-mates, I’m not all that worried about the younger generation. They’ll do just fine. 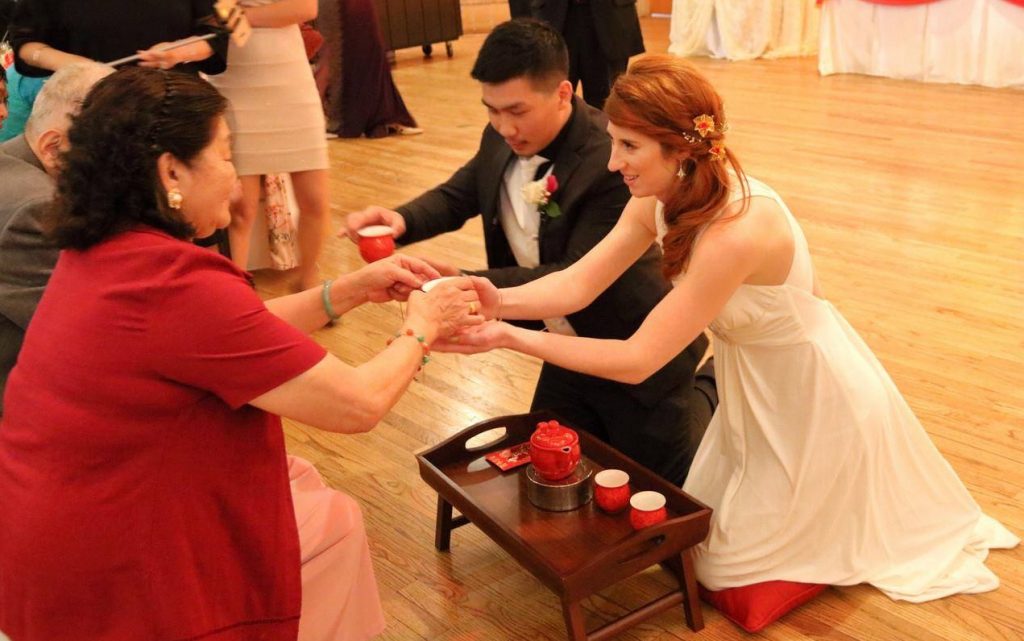 How about you? Do you have some young people in your life who make you proud? 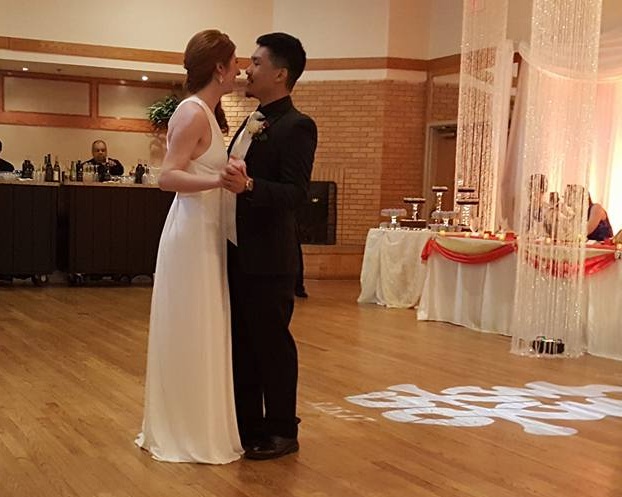 Chinese characters for “good luck” were projected onto the dance floor. (The stiff lace of the red dress made it hard to move; thus the white dress for the reception.)

Two Quick Notes:  I presented at the Writers Alliance of Gainesville this past Sunday, on the topic of Integrating Social Issues into Fiction (pics posted under Author Events and on my Facebook page).

And I’ll be posting this coming Friday, 4/14, on Janice Hardy’s Fiction University on the pros and cons of “writing short” (i.e. short stories and novellas).