When I worked in Eastern Europe and Afghanistan, I got to know many security consultants. And there were a lot of… characters.

But the consultant who stood out the most in my mind was a woman. British, with freckles and curly hair, she looked more barmaid than badass, though she’d worked in personal protection (that’s what they call “bodyguarding” in the biz) and helped companies develop security strategies.

She gave us an unforgettable training on security in warzones. I learned just how much damage an automatic weapon can do and to look people in the eye when in a hostile crowd.

And FYI, landmines only explode when you step off them when they’re made in Hollywood. In real life (well sort of real life), this is what happens:

I got a lot of great and sometimes unbelievable stories from the security consultants I met while overseas. (Sorry I can’t share them with you now; I’m going to use them in future novels. 🙂 )

Note: Do not believe anyone who tells you they’re the hostage negotiator the film Proof of Life was based on.  I’ve heard that from at least five guys. In the global security consultant biz, it’s a thing.

Bottom line? It’s a crazy business. People go into it from all sorts of backgrounds and for all sorts of reasons. And they get thrown into hostile situations on a regular basis.

The idea of a female global security consultant as a fictional heroine stuck with me. It took me a while to develop it, but eventually, Rocky (short for Raquelle) Bridges was born.

When we meet Rocky, in The Mannequin Offensive, she is seriously considering getting out of the biz after losing a client in a hotel bombing overseas… but life is what happens while we’re making other plans.

The ebook version of The Mannequin Offensive is going to be on sale for 99 cents for one day only – launch day, July 1st. You can pre-order it now at the discounted rate, or buy it July 1st. So give Rocky a chance!

Here’s a bit about the book: 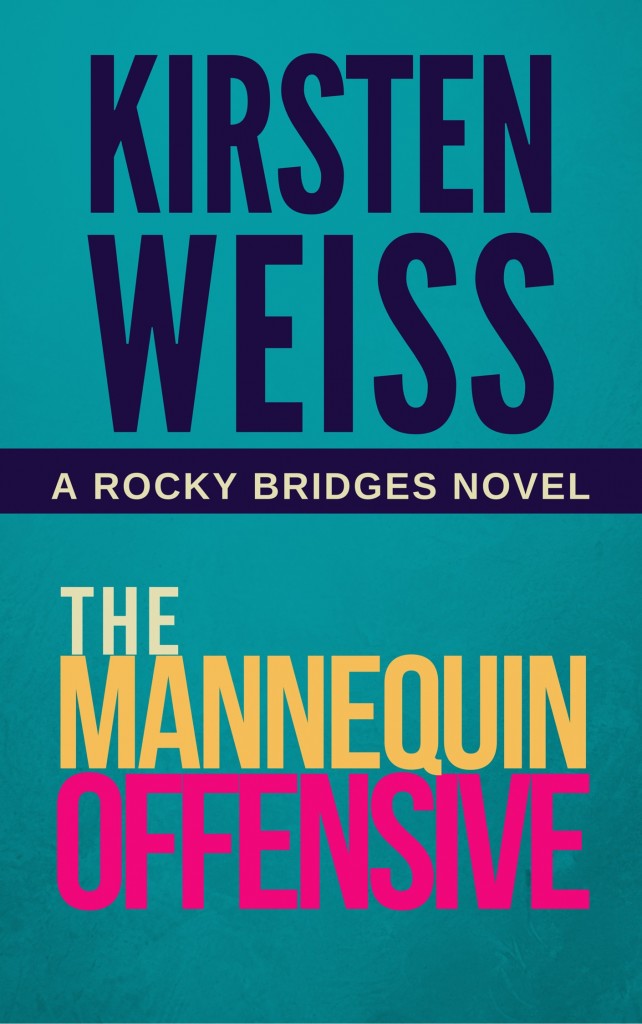 After an overseas assignment goes bad, all Rocky Bridges wants is out of the global security business. No more personal protection gigs. No more jaunts to third world countries. No more managing wayward contractors. But when her business partner is killed, Rocky must investigate her own company and clients.

Rocky’s no PI, but she’s always trusted her instincts. Knife-wielding mobsters, sexy insurance investigators, and a Russian-model turned business partner are all in a day’s work. But her inner voice has developed a mind of its own, and she finds herself questioning her sanity as well as reality as she knows it. Rocky can’t trust those around her. Can she trust herself?

The Mannequin Offensive is a fast-paced novel of mystery and suspense with a hint of magic.

(Also Vinnie Hansen has a giveaway going over at Goodreads. Three copies of her new release, Squeezed and Juiced. Check it out!)

Kirsten Weiss worked overseas for nearly twenty years in the fringes of the former USSR, Africa, and South-east Asia.  Her experiences abroad sparked an interest in the effects of mysticism and mythology, and how both are woven into our daily lives.

Now based in San Mateo, CA, she writes genre-blending steampunk suspense, urban fantasy, and mystery, mixing her experiences and imagination to create a vivid world of magic and mayhem.

Kirsten has never met a dessert she didn’t like, and her guilty pleasures are watching Ghost Whisperer re-runs and drinking red wine. Sign up for her newsletter to get free updates on her latest work at: http://kirstenweiss.com