In March, I visited the Santa Clara Crime Lab because hey, that’s the kind of thing crime writers do on a lovely spring day.

My husband, Danny, went along. He enjoys police info, too. I guess you better if you’re married to a mystery author.

We were disappointed to learn that we would not be able to traipse about the lab. Even though the event was advertised as a “virtual” tour, when Danny and I visited the FBI Crime Lab in San Francisco, our guide led us right up to the line of weapons waiting for rifling tests. But that was many years ago and our group consisted of just Danny, Cara Black and me. 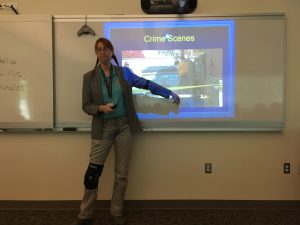 The Santa Clara Crime Lab presentation drew over 20 sisters and misters from NorCal Sisters in Crime as well as a whole class from a local college. I was glad that criminalist Cordelia Willis did not try to herd such an unwieldy flock.

But even if there were only a few of us, we could not have entered the lab. Our very breath could contaminate DNA evidence!

Instead, we congregated in the training room for slides and an informative talk.

Here are a dozen fun facts from our two-hour stint:

Have you ever wondered how much of CSI is true? What’s a question you would like answered by a crime lab? 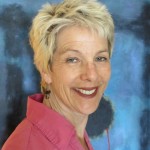 Vinnie is a retired English teacher and award-winning author. Her Carol Sabala mystery series is set in Santa Cruz, California.

Her forthcoming book, Lostart Street, is a stand-alone novel of mystery, manslaughter and moonbeams.

Here’s a sneak peak at the cover. If you saw the cover in the last post, you’ll notice the new iteration is slightly different. What do you think? 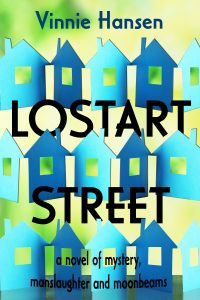