Two of our authors use elemental magic in their stories, so we thought, in honor of this magical time of year, we would give you a little insight into how this magic works in each world.

First up is Kirsten Weiss discussing the magic used in her  Riga Hayworth Paranormal Mystery series:

Here’s an issue I confounded one of my editors with in my upcoming book, The Elemental Detective. What’s the difference between magical elementals and elements used in magic?

Elementals are mythical beings or nature spirits that have an affinity for an element. And in certain types of magic, the magician may embark on a pathworking, journeying through an inner landscape to interact with these elementals. It’s considered higher level magic, because elementals can be capricious and dangerous.

As to the elements in magic, that story begins with the ancient philosophers, who divided the matter of the universe into four elements: earth, wind, air and fire. It really got going in the 3rd century, when Plato proposed a fifth element: spirit. These elements were seen as the building blocks for everything in creation. 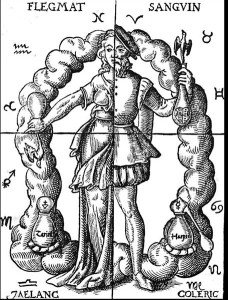 Book illustration from “Quina Essentia” by Leonhart Thurneisser zum Thum. Depicts the correspondences between the four humors, four elements, and zodiacal signs from an alchemical perspective.

While this elemental philosophy developed, Renaissance philosophers explored the concept of correspondences – that everything in heaven corresponded to something on earth. For example, they saw a hierarchy in the skies. Heaven was just beyond Saturn, the planets forming a sort of descending staircase of increasingly dense matter, with earth in the lowest, most coarse position. This hierarchy was reflected in the hierarchy among humans – from king to commoner. The planets had many other correspondences. E.g. the moon (considered a planet) corresponds to water, to cycles, to change. In turn, the water element had its own correspondences, such as the emotions and intuition.

So in magic, you could use an element that corresponded to your intended effect and help charge your spell. For example in a love spell, which affects the emotions, you might use something that symbolized water, like a sea shell.

(Kirsten works part-time as a writer and part-time as an international development consultant. She writes the Riga Hayworth paranormal mystery novels. Her fifth book in the series, The Elemental Detective, will be available December 21, 2013.)

In Shannon Esposito’s Pet Psychic Mystery series, the main character, Darwin Winters, is half water elemental. Her human mother fell in love with an elemental magician. They had three daughters, who each wield one magick element–water, fire, earth. In the newly released book, SILENCE IS GOLDEN, you get to meet her sister Willow, the earth elemental.

Darwin’s connection with water was the easiest to imagine because water is such a necessary component of life. Humans are made up of 60% water, and water covers over 70% of the earth’s surface. Add to this the fact that at the basic level everything is energy, including our thoughts, and it’s not hard to create magic.

Darwin’s gift allows her a higher level of concentration, compressing the energy of her thoughts and allowing her to feed that energy into the water molecules. By doing this, she can control the water or add specific energy patterns to it–like love and happiness.

But, like everything in life, practice makes perfect and Darwin has only recently begun to embrace her gift instead of shun it. This means she’s also trying to figure out the ethics involved in using her gift. In this recent book, she gets into a bit of hot water with her hunky homicide detective boyfriend when she gives him magic-infused water without his knowledge.

One man, Dr. Masaru Emoto, has dedicated his life study to the effects of our thoughts and words on water. He has some pretty interesting ideas about water taking on the resonance of the energy directed at it. Whether you’re a believer or a skeptic, his photos of water are beautiful and give one hope that we do have some control over our fate in this crazy world.

If you had the gift of elemental magic, would you use it without your friend’s consent? Or is that meddling with the natural order of things?