We have a special guest today–travel writer Stuart Thornton–as well as a an amazing giveaway with mysteries, cookies, travel books, and bookstore credit!

Now here’s Stuart to tell you the tale of one of his many adventures:

An Unusual Occurrence at Usal Beach

While researching my Moon Coastal California guidebook, I had an evening that played out more like a scene in a mystery novel than a night of notetaking. It all occurred at Usal Beach, which is 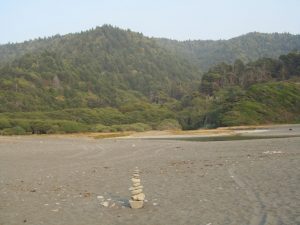 located on a remote stretch of California coastline within Sinkyone Wilderness State Park.
The expanse of dark sand and the rustic campground behind it was everything a Northern California beach should be: wild, powerful, and mysterious.

My friend Shane and I pitched a tent away from a herd of Roosevelt elk with antlers as large as chandeliers. 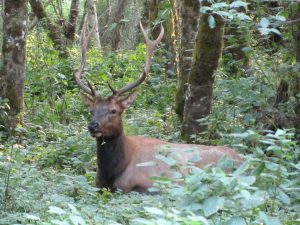 We watched the sunset fall into the ocean like a giant ember and then cooked up a fine campfire meal while listening to a North Coast pirate radio station on my small camp radio. After a couple of beers, we each retired to our own tent for the evening.
Fzzzow. Fzzzooooow. Ffffzzooooooowwwww. I woke up to the sound of gunshots near our campsite. Outside the full moon seemed to shine down on my tent like a spotlight.

In the distance, I could hear Shane snoring in his tent. Then ffffzzzzzzoooooooowwww. I grew up around hunting and guns, but this shot sounded cold, metallic, evil. It also sounded like the shooter was coming closer. I sat up in my tent, and I felt as alone as I’d ever felt in my life.

Fffffffffzzzzzzooooooowwwww. Shane suddenly stopped snoring. “Did you hear that?” I whispered to him.

We both lay still in our tents. I began thinking about why someone would be firing a gun this late. It could be drunken locals, but there was no boisterous shouts or loud music. Maybe the shooter was trying to scare off a bear or an elk?  But only a shot or two would probably be needed to do that. My next thought: What if it’s a murderer?

Ffffzzzoooooowww. Another shot. I started thinking of survival. In the tent, I felt as helpless as a fish caught in a net. Someone could just walk up and blast the tent with bullets and that would be it.

“Want to meet outside?” Shane called out.

I scrambled outside my tent and soon Shane and I were standing out in the moonlight. Though we were in the open, it felt good to have someone around.

“What if it is someone walking around popping campers?” Shane said, echoing what I was thinking.

I shivered uncontrollably. It was not because of the cold outside.

“I did bring this for bears,” Shane said and slid the handle of a pistol out of the pocket of his hooded sweatshirt. It was somewhat reassuring, but it didn’t vanquish all of my fear.

Around 50 feet away in the woods, a light appeared. Ffffzzzoooooowww. The light was gone right as the shot rang out. It was like it had been blasted out of existence. Farther away, a car alarm went off.

Shane and I made it out, up and over the steep, mountainous road to the highway. We scanned the local newspapers the next morning expecting to read about a multiple homicide at Usal Beach, but there was nothing. I later talked to a park ranger about the incident, but he just called the park “The Wild West.”

While travelers may, understandably, not be comfortable with the sound of gunshots while sleeping, Usal Beach did make it into Moon Coastal California as one of the best beaches for wildlife in the state. I warn about the firearms for other prospective campers, but whatever happened in the hours after midnight at that remote California beach is still a mystery to me. 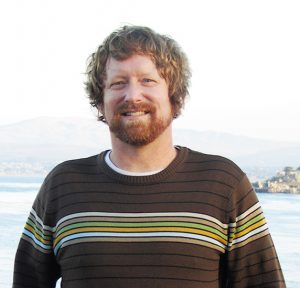 Stuart Thornton fell in love with the California coast while working at the Big Sur Ranger Station after college. At work, he provided visitors with all sorts of information about the region, from the best places to camp to the best meal in the area. On his days off, he took his own advice and regularly sought out the best spots for hiking, backpacking, surfing, and snorkeling along that striking coastal region.

Stuart later moved to nearby Monterey to become a staff writer for the Monterey County Weekly, which he still contributes to. He is the proud author of Moon Coastal California, Moon Santa Barbara & The Central Coast, Moon Monterey & Carmel, and Moon California Road Trip. In addition, Stuart has contributed to National Geographic Education, Relix Magazine, and Ed Grant’s Piers of the California Coast, a coffee table book highlighting the Golden State’s piers and wharves.

He spends his time off searching for the next secluded beach, uncrowded wave, or mountain top vista. Learn more about his adventures and projects by visiting www.stuartthornton.com.

And now for that amazing giveaway I promised! Check it out–travel books, a full-set of my mysteries,  Santa Cruz Cookie Company cookies, and a $200 gift certificate at Bookshop Santa Cruz (or a bookstore of your choice). 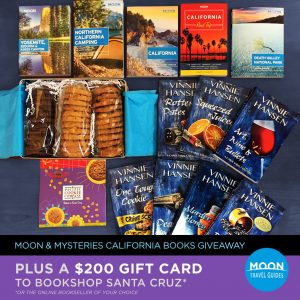 Now, what is your spookiest travel adventure?

Please follow us so you don’t miss out on any of the interesting stuff, or the fun! (We do not lend, sell nor otherwise bend, spindle or mutilate followers’ e-mail addresses. ? )