In August I received the “coveted” Golden Donut. 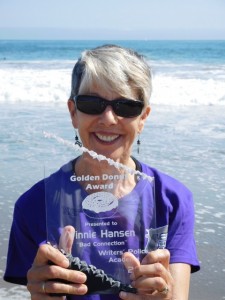 Sounds like something invented by a cop, right? It is. The Writers’ Police Academy (WPA) awards the Golden Donut.

I’ve heard nothing but rave reviews of the WPA, held this year in Appleton, Wisconsin at the new Fox Valley Technical College Public Safety Training Center.

The WPA is a small conference (300 attendees this year) at which law enforcement officers, firefighters, and EMTs work hands on with writers who are eager to get their facts straight. Writers learn to handcuff, lift prints, and shoot. They examine blood splatter, practice takedowns, and visit a jail and a morgue. All kinds of fun stuff.

Although attending WPA ranks high on my bucket list, this year I was not able to attend.

However, I did enter the WPA’s writing contest, which is open to non-attendees. The contest starts with a photo prompt. Here is this year’s image: 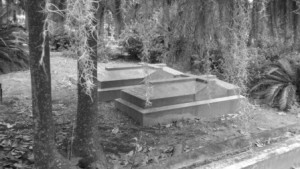 The scene in the image must play a vital part in the storyline. Stories must also be exactly 200 words—not 199 or 201. If a submission doesn’t follow the rules, well . . . this is a contest run by law enforcement!

However, the final judge this year was Sara Gruen *swoon*. I’m doubly honored that she is the one who chose my story “Bad Connection” as the winner of the coveted Golden Donut. For those who don’t know, Sara Gruen is the author of Water for Elephants.

So, without further ado, here is my 200-word story inspired by the two gravestones in the photo.

Adam and Bette talked via identical tin cans. The connective wire snaked out Adam’s bedroom, across the bare side yards, and in through Bette’s window. In the cookie-cutter houses, their bedrooms matched like shoes.

When they were seven, Adam announced: “We’re going to get married.”

The words vibrated over to Bette’s heart.

“And be together forever!”

Their childhood conversations grew into teenaged angst on house phones, and years into their marriage, continued on mobile phones. Then their voices became texts:

Rotten egg? He barreled down the street.
U R on.

Adam and Bette startled at the other’s mass of metal rocketing toward them, as though God had yanked the string on a pair of nunchuks. They collided head-on, the cars smashed like recycled soup cans.

Now they lie side by side in matched containers, calling to each other across a narrow passage of dirt.

You can check out some of the runner-up stories over at the WPA site.