Reality in Our Fiction

by Kassandra Lamb ~ We fiction writers invent all kinds of things—make-believe settings, fictitious events, imaginary friends (er, I mean, characters). In other words, we make stuff up. But we are often inspired by real events, and may include bits of reality in our fiction stories.

In her historical mystery, The Case of the Runaway Girl, K.B. Owen takes the real life of Senator Shelby Moore Cullom, during his work on the passage of the Interstate Commerce Act (1887-88), and puts a fictitious twist on it.

And Sasscer Hill set her recent release, Shooting Star at Santa Anita Racecourse in California, where HBO filmed the real and ill-fated series, Luck. Unfortunately, the Luck crew’s ignorance about and mishandling of the horses used in the episodes led to several equine deaths and the show’s cancellation.

Sasscer’s story revolves around a fictitious movie being filmed at that track. And her main character’s job is to go undercover and make sure the horses are treated properly.

Then a cameraman is murdered right in front of her, and the mystery is off and running—pun fully intended. (For more on how Sasscer weaves the realities of the horse-racing world into her stories, see her recent guest post, How a Horse Race Led to a Book Contract.)

My book, Zero Hero was inspired by the very real experience of watching the news media replay the destruction at Ground Zero again and again on 9/11/2011. I found myself yelling at the TV, “What are you doing?”

I knew they were going to trigger all kinds of issues in the survivors, and even in some of us who merely watched the horrors unfold on our TVs on 9/11. So I told the story of a fictitious 9/11 first responder whose life unravels when those video loops on the 10th anniversary set off delayed PTSD.

These bits of reality in our fiction lend credibility to our stories.

But we need to be true to those real events; we should do the research so that we are not misrepresenting that reality.

The idea for Candace J. Carter’s protagonist, Henry “Whispering” Smith, came from a wanted poster she saw in a general store window in Nevada, titled Wanted Sheep Rustlers. She did the research and discovered that livestock rustling is still a very big problem today. So she made Henry a “stock detective.”

When we are true to the bits of reality in our fiction, we are offering interesting morsels of education along with entertainment in our stories. A win-win for readers, and for us.

What real events/places have you learned about through reading fiction?

My book, Zero Hero is on sale for one more day! Grab the ebook for 99¢

On the 10th anniversary of 9/11 the media replays the videos of that day’s devastation, and a national hero’s life begins to unravel.

When the first responder—already struggling with delayed PTSD and addiction—is accused of murdering his former drug dealer, psychotherapist Kate Huntington finds herself going above and beyond to help him. As she and her P.I. husband set out to clear him of the charges, they are thrust into a deadly world of drugs, prostitutes and hired killers, and end up questioning who they are… and what it means to be brave. 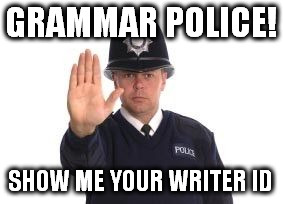 6 Answers Fiction Writers Have for the Grammar Police

12 Ways to Get Cozy During the 12 Days of Christmas