Spin-Off Series in Crime Fiction (Plus a Kirsten Weiss Release)

by Kassandra Lamb ~ Just like on TV, we mystery authors sometimes do spin-off series in our crime fiction.

When we fall in love with a secondary character, or even sometimes a setting, we may feel compelled to start a new series based on that character or setting.

Why not just continue the existing series to keep that character alive?

Because main characters have what we writers call arcs. The character starts in a certain place—usually not a great place—and then deals with certain challenges, overcomes obstacles, grows and changes, and eventually (usually) ends up in a better place.

For example, in my Kate Huntington series, psychotherapist Kate has an almost perfect life, until a killer tears it apart. (Spoiler alert) The death of her first husband in Book 1, leaves her a bit neurotic about loss.

Over the course of the series, she struggles with that neurosis and becomes less passive and more of a kickass protector of herself and others. In the final Book 10, her issues about her first husband’s death, which she thought were behind her, are stirred up again, and she finally puts them to rest.

She’s now in her fifties, menopausal, with teenage children, and she is done as a main character. There isn’t much more I can do to her to make her grow, without it seeming forced. And her aging is making it harder to realistically maintain her kickass status. I didn’t want to reach the point where, when she uses her aikido moves to take down a bad guy, her knees are popping. 😉 (For more on when to end a series, see this post.)

But Judith Anderson—the police detective who appears in at least half of the Kate books—was just coming into her own as a three-dimensional character in the last few books of the series.

And I really like her. So I’ve decided to do a spin-off series starring her.

Only I’m moving her to Florida and making her the Chief of Police of a small fictitious city near Jacksonville. I have a tentative title for the series—C.O.P. On the Scene (because she likes to show up at crime scenes and become actively involved in her detectives’ cases, which doesn’t always sit well with them).

Kirsten Weiss, on the other hand, has done a spin-off series based on a setting.

Her Doyle Witch series is set in a fictitious mountain town in California, where magic and fairies hover just below the surface of this normal-seeming community.

In this series, Kirsten explores a variety of ways that darker paranormal forces can wreak havoc on the town, and her triplet good witches, Jayce, Karin and Lenore Bonheim, manage to save the day.

One of the ways that the “normal” townspeople have explained away the paranormal occurrences is via UFO visitations. Indeed, the town of Doyle has become a tourist attraction for those fascinated by UFOs.

And this is where her spin-off series comes in.

Her main character, Susan Witsend inherits a UFO-themed Bed and Breakfast named Wits’ End. Not sure she believes in UFOs herself, she nonetheless is determined to organize the B&B into a profitable enterprise.

But when people keep getting murdered at an alarming rate in their small town, Susan ends up using her organizational skills to help the local sheriff solve these murders (whether the sheriff wants her help or not).

There are 3 books in this series, with Book 4, War of the Squirrels releasing this Thursday! These books are great fun to read. I highly recommend them.

And now readers, I will turn it over to you. What spin-off book or TV series are among your favorites?

And here’s the scoop on Kirsten’s Book!

War of the Squirrels, A Doyle Cozy Mystery (Wits’ End #4)

All Susan Witsend wants is to get through this visit from her controlling parents without tumbling down a black hole of despair. But galactic forces are colliding at her whimsical B&B, Wits’ End, and her parents have plans of their own.

When two men die on the same day, both mysterious deaths are tied to her mom and dad. Meanwhile, a squirrel scofflaw is riling up the tiny mountain town of Doyle, and Susan realizes she’s the only person who can stop the madness.

If this B&B owner can’t put these crimes to rest fast, her carefully organized life may come crashing to earth.

Misterio press produces an array of quality crime fiction. We post here twice a month—usually on Tuesdays—to alert you to new releases, to entertain, and to inform.

Please follow us (via email, upper right sidebar) so you don’t miss out on new books and other interesting or fun stuff! (We will not lend, sell nor otherwise bend, spindle or mutilate your e-mail address. 🙂 )

Breakfast: The Best Meal of the Day (plus a New Release) 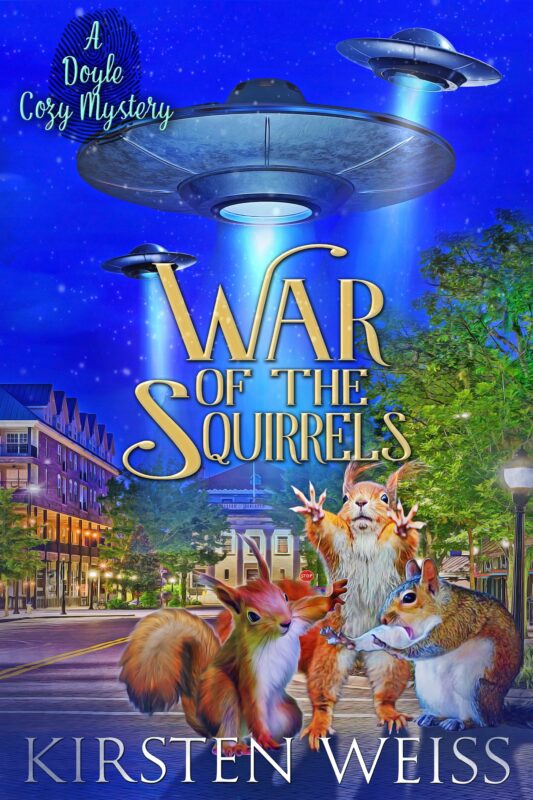