You know what I’m talking about – those frustrating, multiple layers of plastic, foil, paper, and/or cotton that keep you from the pill that will wipe out your headache, calm your anxiety or dry up your allergy-produced drippy nose.

Pills weren’t always distributed that way. Here’s the in-real-life (IRL) mystery behind tamper-resistant packaging, which is still unsolved to this day.

In 1982, seven people died mysteriously. Three were in one family, but the rest were scattered around the Chicago metro area. Other than the family members, there was no connection between the victims.

The police quickly discovered that they had all taken Tylenol® shortly before their deaths. The capsules were tested and were found to contain potassium cyanide, along with the actual medication.

Someone had tampered with the drug, with no particular victim in mind and for no apparent motive. The hardest type of crime to solve.

In the next few days, there were several copycat tamperings and more people died.

The drug’s manufacturer, Johnson and Johnson®, determined that the contamination was not happening at their plant, but nonetheless they immediately implemented a massive recall. Investigators soon decided that the tampering had happened in the stores.

So Johnson and Johnson came out with the first tamper-resistant packaging. Their quick response to the crisis saved their company, and also saved many, many lives since then, as such packaging soon became the norm.

Some of the copycat tamperers were caught, but the one who started the whole mess was never found.

The police thought they had their man when James W. Lewis sent a letter to Johnson and Johnson demanding a million dollars to stop the killing. He was convicted of extortion, but there was no evidence that he had actually done the tampering. He had just taken advantage of the situation.

Other leads were pursued but no culprit was ever definitively identified, and the Tylenol-tampering murders remain unsolved today.

So the next time you are cussing at that pill-bottle you can’t get open, remember this mystery behind that tamper-resistant packaging.

It’s there for a good reason.

To read more about this case and Johnson and Johnson’s response to it, see this article in The New York Times.

This is the first in a new series here on misterio press, regarding IRL mysteries that remain unsolved. In some ways, it’s a rather grim topic, but we are mystery writers after all, so we find such things interesting. We hope you do as well.

Are you old enough to remember the Tylenol-tampering in the 1980s? Do you know of any other in-real-life mysteries?

I saw this article yesterday and wanted to share it.

I don’t know about the whole Chakra thing, but it is true about the cortisol levels going down and hugs encouraging the release of oxytocin.

I’m not sure about Virginia Satir’s numbers, though. I suspect a few hugs a day will suffice for well-being, and I’m pretty sure hugging cats and dogs and other cuddly pets counts (snakes and lizards, maybe not).

Also, a word of caution. Not everyone is comfortable with hugs, so never hug anyone unless you’re sure they’re okay with it (you can always ask, though).

Virtual hugs from us to you!! (Not as satisfying, but the best we can do. 🙂 )

No, that is not a typo in the title—I am asking why the divorce rate is so low. As I contemplate the approach of the 44th Valentine’s Day I will spend with my husband, I thought this was a fitting time to again offer up this post I originally wrote in 2012.

I am absolutely amazed that anybody makes it for 44 years, or longer even, without divorcing. Or committing homicide.

The Divorce Rate is Lower Than You Think 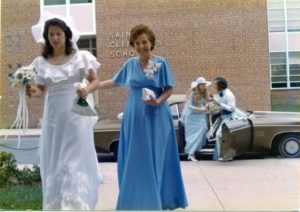 My mother and I going into the church before my wedding. I had no idea what I was getting into.

The common myth is that the divorce rate is 50%. This is just plain not true, but like most myths, it gets repeated so often, with absolute certainty on the part of the person saying it, that we all believe it.

Counting the number of people who are STILL married in any given year and comparing that to the number of divorces is a more complicated and costly process, so it isn’t done very often. (This data, by the way, is collected by the Center for Disease Control. So I want to know which is the disease, marriage or divorce? I’m assuming the latter. But I digress.)

Comparing those getting divorced to those still married paints a very different picture. The divorce rate in the U.S. actually peaked in 1979 at 23%  (yes, that is twenty-three percent; it has never been 50%). These days it hovers around 20%. Much better odds than 50-50!  (If you don’t want to take my word for it, here is a good article on the subject at PsychCentral.)

So why am I saying the divorce rate is surprisingly low, if it’s actually a lot lower than everybody thinks it is?  Because it just isn’t all that easy to stay married for decade after decade.

First we’ve got that whole men-and-women-don’t-really-understand-each-other thing going on. (See my gender differences posts for more on that topic.)

Then, throw the stress of parenthood into the marriage mix. Are we clueless about what we are getting into there, or what? But then again, if we weren’t clueless, the species would have died out by now. If we knew in advance how hard parenting is, nobody would do it! 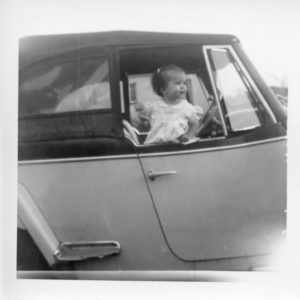 Me giving my mother heart failure, before the age of seatbelts and air conditioning.

And we’ve got the whole aging process, and the fact that people change over time, as they experience new and different things. We don’t always change at the same rate or in the same direction as our partner does. So it takes a lot of work to stay on the same wavelength.

And we should keep in mind that marriage was invented back when the average lifespan was twenty-five years! As recently as the early 1900’s, one partner or the other was bound to die after a couple decades–from childbirth, disease or a cattle stampede.

And I can’t help but suspect that, before the days of modern forensics, a certain number of household accidents were early versions of a Reno quickie divorce.

So how have hubby and I made it this long?

First, you’ve got the making-the-right-choice-to-begin-with factor. We lucked out there, or perhaps it was divine intervention, because I had definitely dated my share of losers before he came along.

The most important part of making that right choice is marrying someone who shares your values. You don’t have to have all the same interests or even come from the same background or ethnic group. But you do need to care about the same things in life. And fortunately we do.

The Most Important Factor in Surviving Marriage

Communication. You gotta talk to each other, every day, about the little stuff and the big stuff, and about how you feel about things. It’s real easy to get out of the habit of doing this, or to decide that a certain subject is just too painful, or will start a fight, so you don’t go there.

Study after study has found that the single most important factor in marital satisfaction is that both spouses consider their partner to be their best friend.

So Happy Valentine’s Day to my best friend! I hope we have many more, but I’m not taking anything for granted, because marriage is hard work. 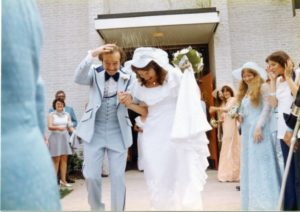 When you stop laughing at hubby’s funny-looking tuxedo, please share your thoughts on the important factors in keeping a relationship strong.

19 Replies : Leave a Reply →
Misterio press is dedicated to producing top quality books for mystery lovers. Whether you enjoy a traditional mystery or a splash of paranormal on the side, we aim to please. So, please browse our current mysteries and check back for new additions!