Even though we’re not a large city, people across the country know of Santa Cruz, California. Huntington Beach may think it’s “Surf City,” but everyone here knows we claim the title.

After all, we’re the ones with a statue of a surfer who wears a pumpkin head on Halloween. And Jack O’Neill, inventor of the wetsuit, lived here until his death last year. 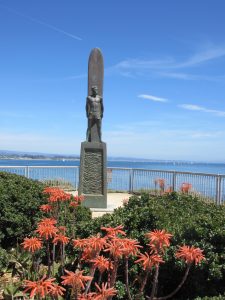 Santa Cruz has  a lighthouse converted to a Surfing Museum and even a hanger for Lost Souls. 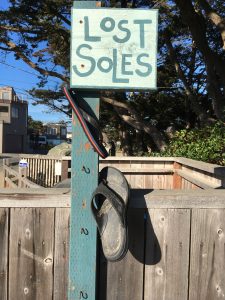 This pole is right beside Jack O’Neill’s home.

Others recognize Santa Cruz as a tourist destination featuring a beautiful coastline and The Boardwalk, with its historic, wooden Giant Dipper roller coaster. But there’s so much more here!

Santa Cruz overflows with artists and musicians. The Doobie Brothers and Neil Young  lived here. Santa Cruz produced James Durbin (who should have won American Idol). My own orchestra leader used to play with Eddie Money. For visual artists, we have a long-running Open Studios event, and we offer first-rate theater via Santa Cruz Shakespeare. 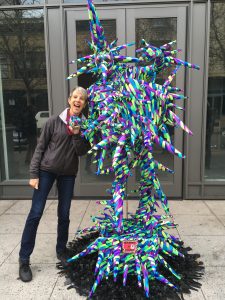 Here I am with The Great Morgani.

Music, visual art, and theater collide in local legend, The Great Morgani. The Great Morgani is a real musician with over 1,000 songs in his repertoire. His costumes (over 50) are all hand-crafted masterpieces that cover even his accordion. And he has his patter down—artist, musician, and thespian—rolled into one. And, just a little weird—a perfect representative for Santa Cruz.

Where else but Santa Cruz can you find Sons of the Beach—as many as 200 ukulele players congregating every Saturday morning to play music? And that’s separate from the Santa Cruz Ukulele Club, which boasts it’s the largest ukulele club in the world! 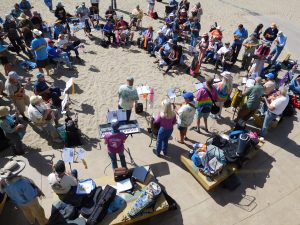 Not convinced yet that we’re any quirkier than, say, Austin, Texas?

In our Santa Cruz Mountains, we have a museum dedicated to Bigfoot and a physics defying Mystery Spot.

We’re literally fishy. Fish were vital to the native Ohlone. Commercial and sport fishing remain integral to our community. 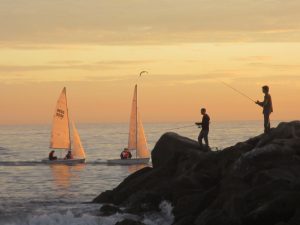 Santa Cruz is a city where you go for a walk and encounter magic. It’s part of our everyday life. We expect nothing less. 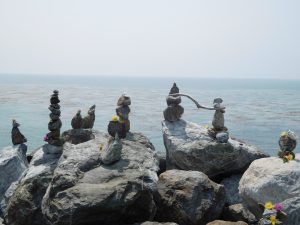 And now to celebrate the wonder and weirdness of Santa Cruz, Nancy Lynn Jarvis has put together SANTA CRUZ WEIRD, an anthology where all the stories are set in this wacky place. The collection includes my story, “Critical Mass.” Order your copy now and let the fun begin. 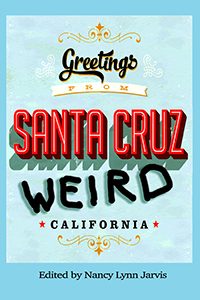 What is the strangest story associated with the place where you live?

Vinnie Hansen fled the howling winds of South Dakota and headed for the California coast the day after high school graduation.

Still sane(ish) after 27 years of teaching high school English, Vinnie has retired. She plays keyboards with ukulele bands in Santa Cruz, California, where she lives with her husband and the requisite cat.