First, did you know yesterday was Paperback Book Day?  I was trying to get Patches In the Rye‘s paperback out in time for this auspicious day, but glitches happened.

Second, Kirsten Weiss had what I think is a very clever idea. She has a fictional character, one of the Bonheim Witches of Doyle triplets, who is a romance writer.

So she’s publishing in-between novellas in her Doyle Witches’s series that are romantic suspense novellas “written” by her fictional character, Karin Bonheim.

On Saturday, she released the 3rd novella is this In-Betweens series. Check it out below!

And also please stop back next week when Kirsten and I will both talk about our reasons for and adventures with dabbling in romantic suspense.

And the third goodie for today is a review of my newest release, Patches In The Rye, by Barb Taub. And a bonus feature is Barb’s delightful humor. Check it out HERE. 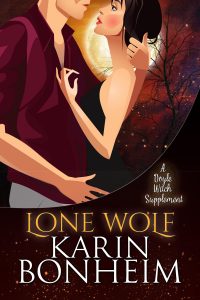 A mystery within a mystery, Lone Wolf is novella three in the Doyle Witch supplements, and the sequel to Shaman’s Bane by fictional witch, Karin Bonheim.

And Karin has gone missing…

1 thought on “A Few Quick Goodies on Our “Off” Week”