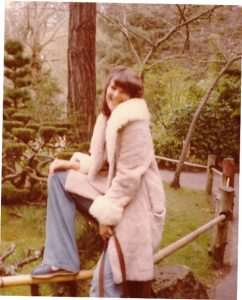 Way back, when I was in the graduate writing program at San Francisco State, I had short stories published in the campus literary magazines every semester. This instilled confidence in my writing, but also inflated my ego. I launched into the world thinking I might set the literary world on fire. Instead, after a few years, I realized I needed to eat and went back to school for a teaching credential.

While I still aspired to write books, short stories buoyed me during my teaching career. I could squeeze these manageable bits into my holidays and summers. The manuscripts found homes, won contests, and kept my writing dream alive. 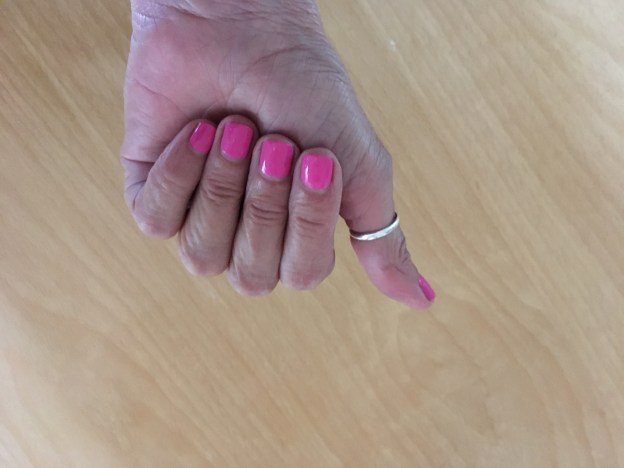 Short stories even have their own OPI nail polish. This color is called Short Story. 🙂

But I didn’t stop longing to write books and eventually hit on my Carol Sabala mystery series.

This year, after writing seven books in the series, as well as a stand-alone novel, I find myself back, full circle, concentrating on shorter works. I enjoy being able to envision the whole arc of the story from the get-go, certainly not something that happens for me with a 300-page manuscript. I like the time to fuss at the sentence level, weighing each word.

Last August, I added a novella prequel to my Carol Sabala series, which became one of the works in SLEUTHING WOMEN II: 10 MYSTERY NOVELLAS. It may have been at this point that I began seriously to contemplate the other advantages of going short. 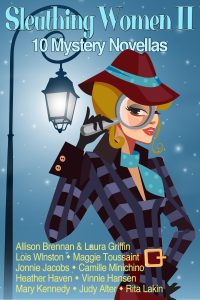 While short fiction may mean fewer readers, it means more cohorts. In SLEUTHING WOMEN II, I rubbed shoulders with 10 other authors (one of the authors being a team)—meaning ten others to help market the product. We pooled our resources to buy advertising and took turns posting on blog tours. We amplified one another’s voices. Our e-anthology sells for only $.99, but I’ve been making money, and remember, that’s splitting the profit with 10 others.

Working collaboratively also creates connections and friendships. This year I headed off to Left Coast Crime in Reno armed with the cell number of the Guest of Honor, Naomi Hirahara. This only came about because we are both in Akashic Books’ SANTA CRUZ NOIR. 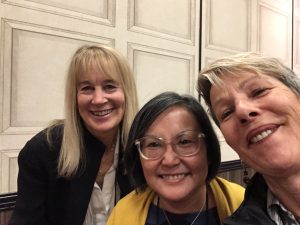 Clowning with Peggy Townsend and Naomi Hirahara. We all have stories in SANTA CRUZ NOIR.

Because Akashic Books’ Noir Series is world famous, encompassing over 80 titles from BALTIMORE NOIR to ZAGREB NOIR, their $200 payment for my story “Miscalculation,” qualified me to become an active member of Mystery Writers of America as did the earnings on the Sleuthing Women e-anthologies. This is not a benchmark I’d reached with my individual book-length works. To consider the financial reward of short fiction, for one flash-fiction piece (200 words), I garnered the Golden Donut Award, which came with free registration to the Writers’ Police Academy. The registration is currently a $425 value. That’s over $2.00 a word remuneration. Think about that in terms of a full-length book of 60,000 to 80,000 words!

As part of a well-established brand, SANTA CRUZ NOIR 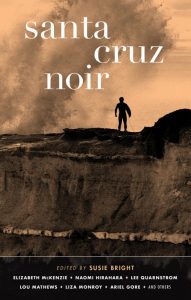 received reviews in Publishers’ Weekly and Kirkus. In Kirkus Review, I received my own little paragraph: Though many of these stories are more interested in evoking a voice or mood than pursuing a plot to its conclusion, Vinnie Hansen’s “Miscalculation” provides a textbook example of how many twists can fit into the simple tale of a bank teller’s adventures with the Guitar Case Bandit.

Short stories also seem like the most probable way for me to be considered for an award. Edgars, for example, are awarded for short stories. Stories in collections like SANTA CRUZ NOIR, or the upcoming Sisters in Crime Guppies’ anthology, FISHY BUSINESS, (to which I’ve had my story “Room and Board” accepted), can be put before the Edgar Committee. Once an author wins an Edgar, he/she does not have to qualify that the award was for short story. One’s info can simply say, “Edgar Award winning author.”

Finally, short works are a way to keep my name in front of readers. I’m an incredibly slow writer. It takes me a couple of years to turn out a book-length manuscript. But between books I can announce other publications. My last book, my novel LOSTART STREET, was published in May, 2017, and I don’t see another book release until summer 2019. However, in the meantime, my novella SMOKED MEAT came out in August, 2017, my story in SANTA CRUZ NOIR released in June, 2018. Another story will come out in a local anthology titled SANTA CRUZ WEIRD in August, 2018. FISHY BUSINESS will reach the copy-editing stage about October, 2018, and I just learned that my story “Last Word” will be in FAULT LINES, the NorCal Sisters in Crime anthology. These stories fill the breech until my next book-length work.

How do you feel, as a reader and/or writer, about short stories and novellas? 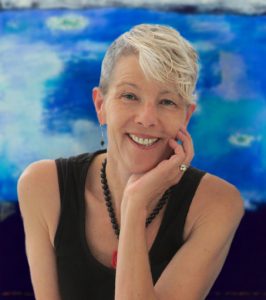 Vinnie Hansen fled the howling winds of South Dakota and headed for the California coast the day after high school graduation. She’s now the author of numerous short stories, the Carol Sabala mystery series, and LOSTART STREET, a cross-genre novel of mystery, murder, and moonbeams. Still sane(ish) after 27 years of teaching high school English, Vinnie has retired. She plays keyboards with ukulele bands in Santa Cruz, California, where she lives with her husband and the requisite cat.