I went to the Romance Writers of America conference last week. Yes, I know I’m a mystery writer, but I went anyway, for four reasons. 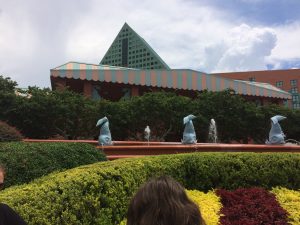 RWA was at the Dolphin Disney Resort Hotel

One, I’d heard it was a great conference, regardless of your genre. Two, I have started adding more romance to my mysteries (some are true romantic suspense).

Three, it was in Orlando, just 2½ hours from my home so minimal travel expenses. And four, my delightful daughter-in-law, romance writer G.G. Andrew, was going.

I can’t say that I was a complete stranger in a strange land, but I did feel a tiny bit like the dolphins in the pic above, a fish out of water. No fault of RWA or the romance authors I interacted with. They were all great! Very friendly and upbeat.

Which brings me to the subtle differences between mystery and romance writers:

1.  Romance writers may be “bigger than life.”

There were lots of rather wild-looking and/or fun outfits, and more skirts and dresses than I’ve seen since I left corporate America about three careers ago. 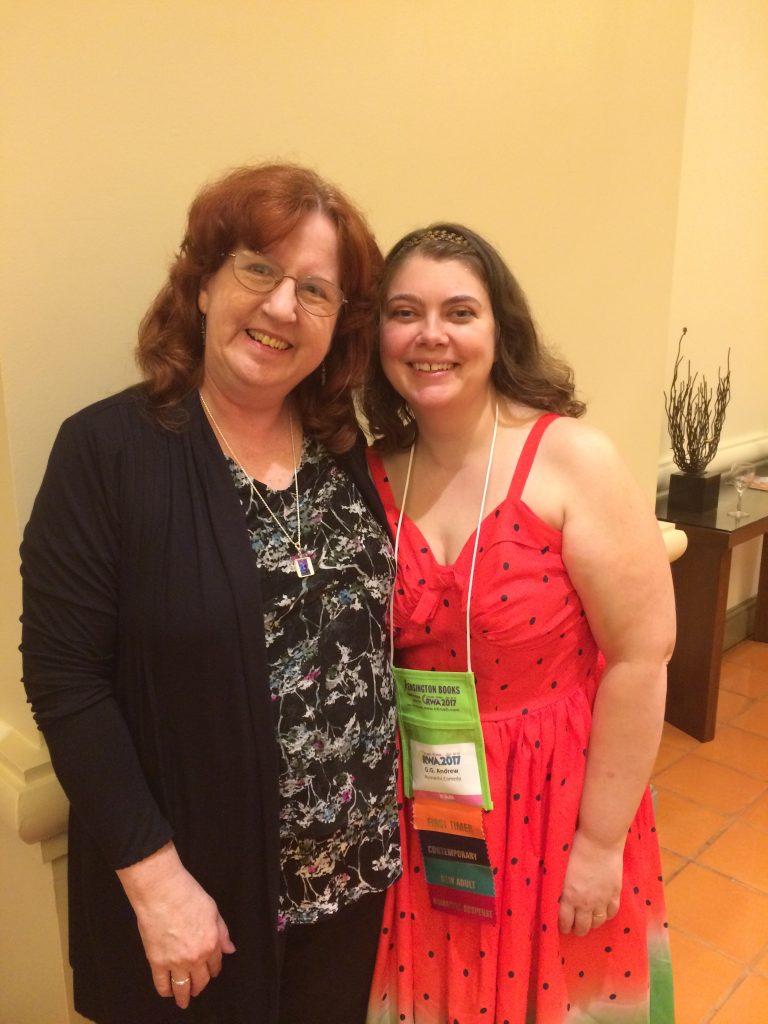 Me with my delightful daughter-in-law. Her dress is made to look like a watermelon wedge!

Not that most of said skirts/dresses would have been considered appropriate office wear. I saw unicorns and rainbows and you-name-it on many of them. My DIL wore a bright red, metallic-shiny skirt one day, quite short (trust me, not her normal attire) which she’d bought online from a Wonder Woman site. (Yay, Wonder Woman!)

Don’t get me wrong, there are just as many introverted romance writers as there are in the general writer population (i.e. far more than 50%), but many of them seem to be able to overcome that with a semi-flamboyant alter ego.

2.  Romance writers totally get that their stories are “fantasy” and their characters are “bigger than life.”

While we mystery writers are trying to come up with plausible explanations for why our main characters trip over a corpse every few months, romance writers have no problem with repeatedly creating alpha males with six-pack abs and a carefully hidden soft, emotional underbelly. They get it that their readers want to escape into a book and they aren’t afraid to admit it.

I found this refreshing, since a big part of the appeal of mysteries for me, during the years that I was a psychotherapist, was that they were as far away from my real life of listening to people’s heartache (all too often related to failed romances) as I could get.

We mystery writers admit that there are certain “reader expectations” inherent in mysteries (e.g., the protagonist will be in heart-pounding danger at some point) but we tend to equate tropes with clichés.

Romance writers get it that their readers know all the tropes and expect them to be the basis of the stories they read. There was one workshop (one of the best, in my opinion) that was called “Twisting Tropes to Create High-Concept Stories.”

There were several nominees for awards who were self-published, and some of them won the award.

No one batted an eye when a writer identified themselves as an indie author (as I did). This made me sad in a way, since Mystery Writers of America will not even let self-published authors join their organization. (Get with the times, MWA!)

5.  Romance writers respect all variations of their genre.

There didn’t seem to be any subgenres that were considered second-class citizens. Erotica was respected right along with Christian sweet romance, and everything in between. And they had awards for pretty much every one of those subgenres.

Not that mystery writers are snobs about subgenres, most of the time. But there is a little bit of looking down the nose sometimes at cozy writers. And thrillers seem to get a disproportionate share of the limelight, perhaps because they make better movies than a traditional whodunnit. 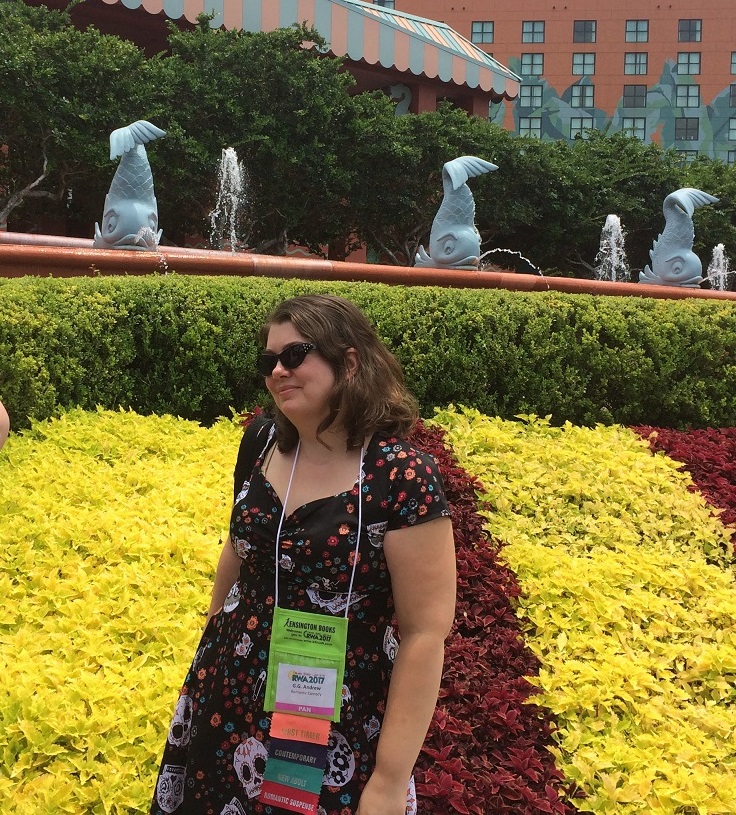 Another cute dress! (and her bright orange first-timer ribbon)

I found the romance writers to be very inclusive. No one reacted the least bit negatively when I identified myself as a mystery author who sometimes wrote romantic suspense.

I’m not sure which is the chicken and which is the egg but this attitude seems to be prevalent throughout RWA. The climate of the organization is inclusive and celebratory. Every writer is phenomenal and everyone is welcome at an RWA conference!

They even put a “first timer” ribbon on your badge so that people will be extra nice and helpful to you! The reputation for being a great conference for any writer, despite the genre, is well deserved.

I think this has been said before but I will reiterate:

The bottom line is that romance and suspense are at the heart of the human condition. We fall in love, despite our best intentions sometimes, and why we do that, or any of the other things we do, is often the greatest mystery of all!

Do you all like some romance with your mystery? What’s your favorite romance (or mystery) trope?

6 thoughts on “A Mystery Writer in Romance Land”