While cover design is certainly not the most stressful part of the book publishing process, it has its quirks. A good cover doesn’t tell the story, but it does need to do three things:

That said, I’ve made my share of cover mistakes.

Exhibit A: What Type of Story is This?

The image on the left, below, is the original cover for the first book in my steampunk series, Steam and Sensibility. I was pleased with it. Corset. Gears. Fog. It’s San Francisco steampunk! I thought the font was a little too much, but that was what the cover designer came up with, so I went for it, thinking all was well. 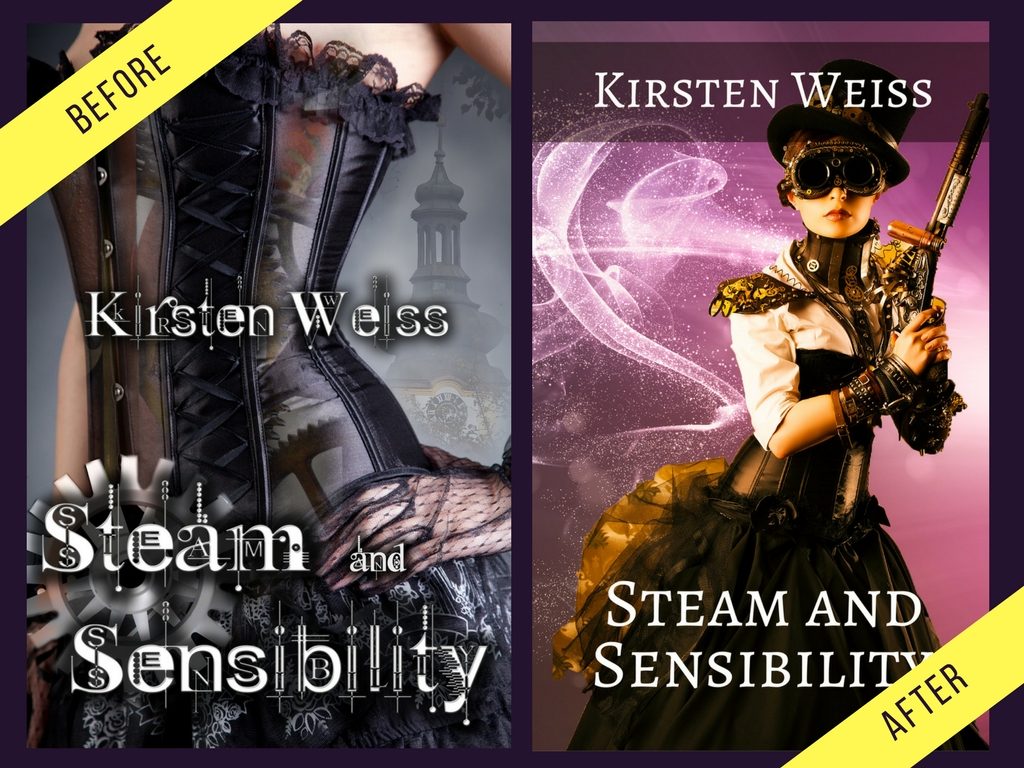 Except when I attended a steampunk convention, a lot of people asked me if the novel was erotica. Ooops!

Don’t get me wrong, I’ve nothing against erotica. But that definitely wasn’t what the book was about. So I switched to the cover on the right – also clearly steampunk, but with a magical flare.

Exhibit B: Contrast Issues and Originality

Another miss, but for a different reason, was the first cover (below left) for The Metaphysical Detective, the first book in my Riga Hayworth series of supernatural mystery. 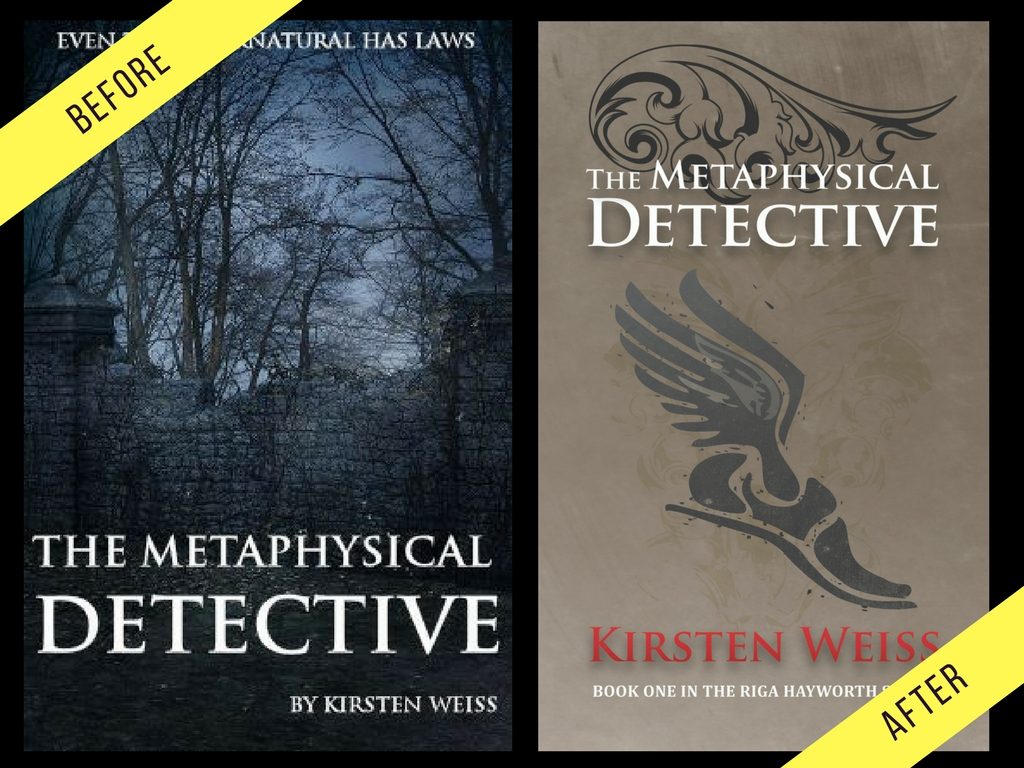 The contrast is low (which is not such a good thing when people are squinting at a tiny icon on Amazon), but it looks suitably gloomy and mysterious.

Since there are seven books in this series, I wanted original artwork that had more of a “series” feeling. Hence the new cover on the right. It’s got slightly higher contrast, and it’s original art. I’m not entirely satisfied with it, but I haven’t gotten around to changing it. 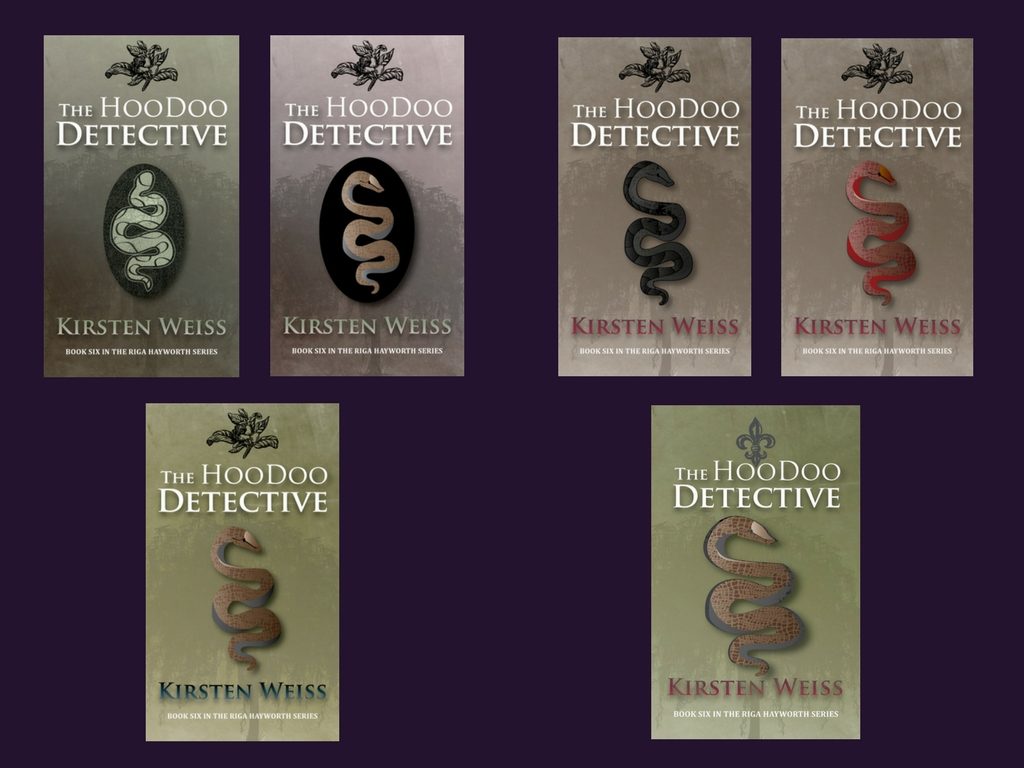 Even when you’ve got a great cover designer, there are typically several iterations before the cover is just right. In fairness, cover designers don’t know what’s in the author’s head. You have to provide them with samples of what you want, and even then, things can get tricky.

And for The Hoodoo Detective (book 6 in the Riga Hayworth series), above is proof that my cover designer has the patience of a saint.

(I ended up with the cover on the bottom right).

And then, sometimes, the cover designer nails it right away… 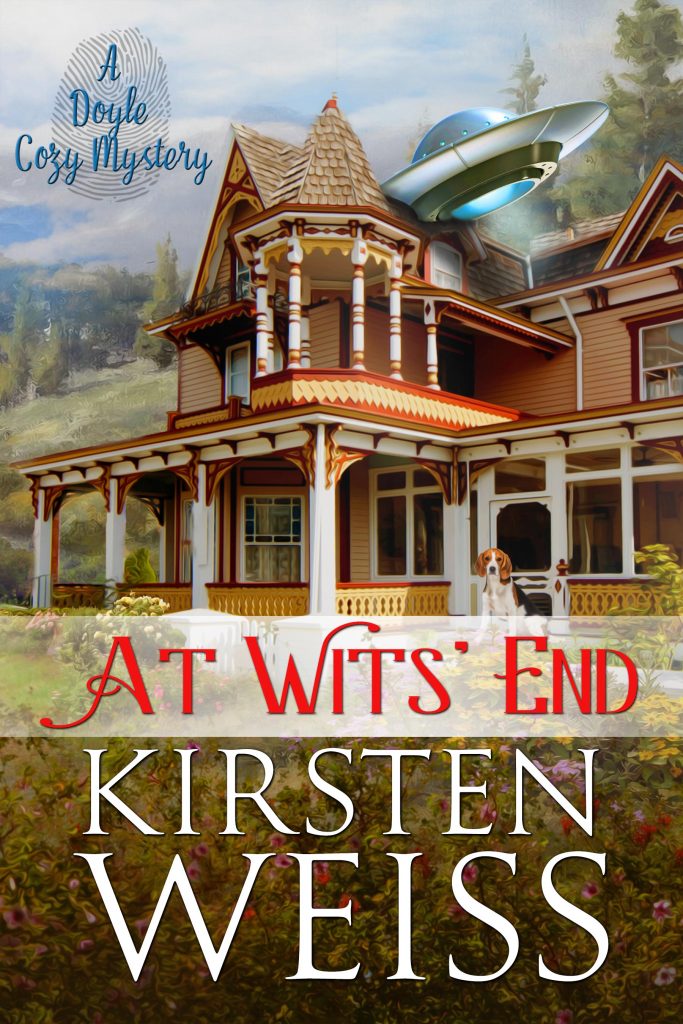 The cover to the right is for a cozy mystery coming out in June, 2017.

What does this cover say to you? And what do you think makes a great book cover?

Posted by Kirsten Weiss. Kirsten worked overseas for nearly twenty years in the fringes of the former USSR, Africa, and South-east Asia.  Her experiences abroad sparked an interest in the effects of mysticism and mythology, and how both are woven into our daily lives. Now based in San Mateo, CA, she writes genre-blending steampunk suspense, urban fantasy, and mystery, mixing her experiences and imagination to create a vivid world of magic and mayhem.

Sign up for her newsletter to get free updates on her latest work.

8 thoughts on “A Peek Behind the Curtain: How We Come Up with Book Covers”