We didn’t get to one of my favorite places this year on our summer sojourn to Maryland. There’s a street of shops in Annapolis that I love to poke around in. Several of them have some pretty unique stuff.

One shop is devoted mostly to handmade pottery jars with cork stoppers and all kinds of interesting things written on the labels. Years ago, I bought a couple of those jars. Here’s one of them: 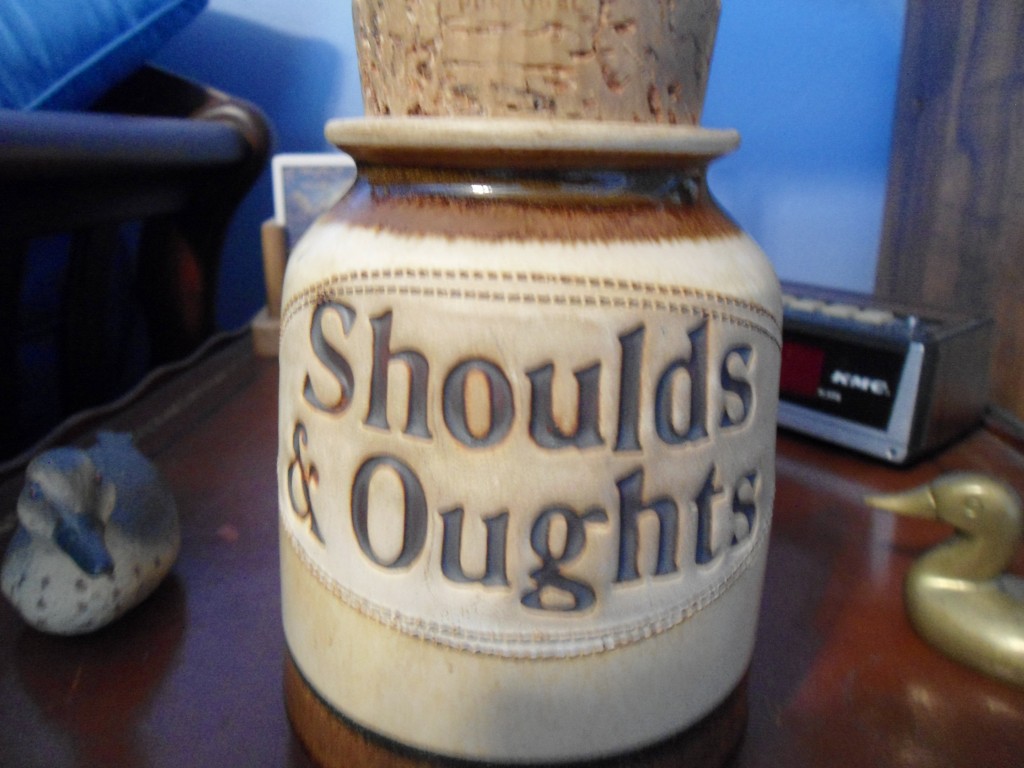 I used to use it in my therapy sessions, when clients were “shoulding” on themselves, i.e. telling me all the reasons they should do something that wasn’t in their best interest, because that’s what they had been taught to do.

Now before I go on, let me put this caveat out there. I’m not advocating that we should all engage in purely self-serving behavior and ignore the morals we were raised to abide by. We have to have moral codes in order to live in families and communities.

The problem comes in during the teaching of those moral codes to young children. Kids by nature are all-or-nothing thinkers. So the rules about what we “should” or “ought” to do tend to be absorbed as absolute truths rather than guidelines for behavior.

Then as adults we often feel we should do something a certain way even though it may not be the best approach in the current circumstances. 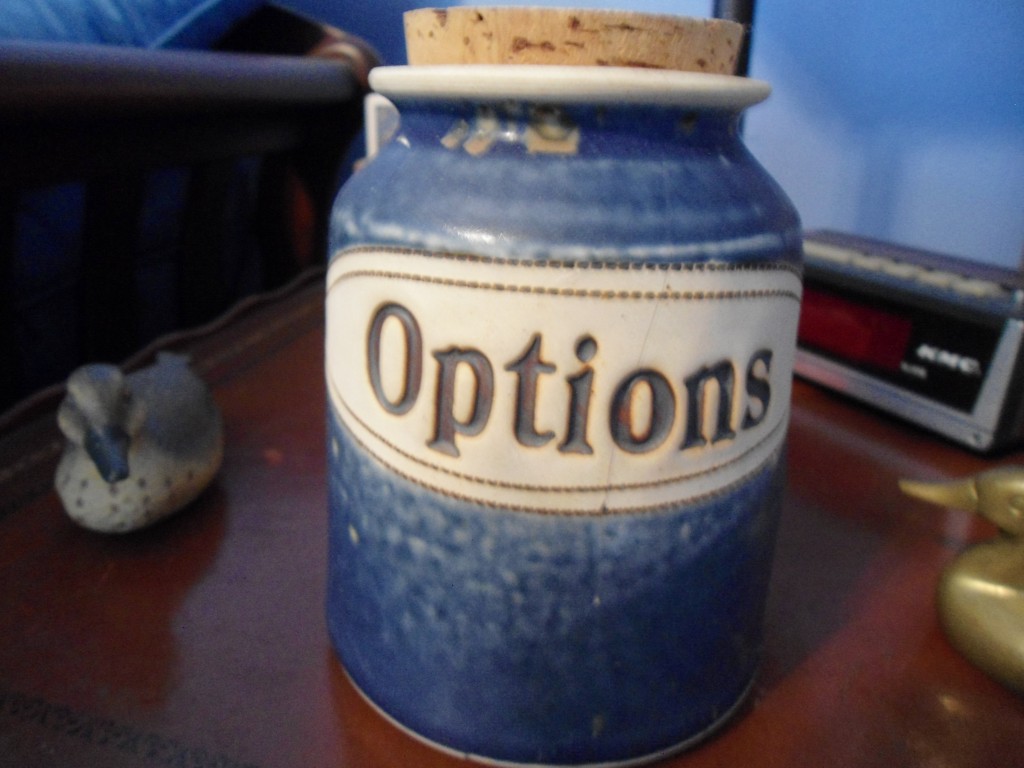 As adults, we have more of these.

A friend of mine once got into a major financial bind herself because she kept bailing out her grown son when said son got in over his head with credit card bills and such.

I finally couldn’t stand by and stay silent any longer so I gently confronted my friend. “Why are you doing this? You’re draining your own savings, and all you’re doing is enabling your son to continue to be irresponsible with money.”

She huffed and rationalized for a few minutes and then said, “Parents should be selfless where their kids are concerned. They should always put their kids’ needs before their own.”

I suggested that she stop and examine that belief. It was one she had learned as a child and teen modeling her own mother, who put up with a bad marriage until all the kids were grown in order to keep food on the table because “at least he’s a good provider.” (I heard that phrase a lot from unhappily married women of my mother’s generation.)

Finally she got it that she wasn’t really helping her son by bailing him out. It was time for some tough love.

Then I went downstairs to my office (it was in my house at the time) and got my shoulds and oughts jar. I had her write down that “should” on a slip of paper, as I often had clients do. Laughing, she put the slip in the jar and smacked the cork firmly back into the top.

And the son… After he had his car repossessed, he got it that he needed to straighten out his thinking about finances. My friend paid for him to go to a financial counselor for several sessions to learn how to handle his money. Now he’s a responsible young man who is raising a couple of kids of his own.

As adults, we need to bring those all-or-nothing rules out into the light of day and ask ourselves if we truly “should” keep following them in such an absolute way. Now we have the ability to weigh the circumstances and the various options available. Often we can find an option that allows us to do the right thing but without harming ourselves in the process.

A funny addendum… One time, a colleague and good friend (who had a warped sense of humor) visited me in my office. As a joke, he grabbed my shoulds and oughts jar off the bookshelf, opened it and dumped all the little slips of paper out on the desk in front of me. I literally jumped back as if they were snakes. 🙂

How about you? Do you have some shoulds and oughts that sometimes trip you up as an adult?