I decided the previous post on this topic was a little too serious, so I’m going to have some fun with this next gender difference in relating.

Meet caveman Charlie Spearhead. (Okay, folks, get your minds outta the gutter! We’re not going to have that much fun.) 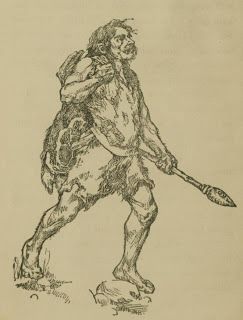 Charlie is really beat. He had to chase that damn elk halfway to the end of the world. As his stomach rumbles, he contemplates the rabbit stew that should be bubbling over the fire at that very moment, and afterwards a nice romp in the furs with his cavemate, Georgette. He grins even as his stomach growls a bit louder.

He soon discovers, however, that a fat elk haunch is not going to be sufficient to buy him a peaceful and fun-filled evening. Georgette starts in the minute he crosses the cave threshold. “You will never believe what that Gertrude Deerhunter did today when we were tanning hides.”

“She had the audacity to imply that my hides are always stiff and I never get all the hair off. Oh, she didn’t come right out and say that but…”

“Charlie, are you listening?”

“Just ignore her. Why do you care what she thinks?”

“I don’t care about her, but she was putting me down in front of all the other women, and she was being so indirect about it that I couldn’t confront her. She’s gotten so high and mighty every since her husband got elected war chief… Charlie, what are you doing?”

I’m trying to talk to you here.”

“Charlie, are you listening to me?”

“Yeah, yeah.” He puts down his spear.

“As I was saying, I couldn’t confront her directly. I’d be the one who’d come off sounding like a bitch, and we’re all going berry-picking tomorrow. I know she’s gonna start up again–”

“Why don’t you go out early,” Charlie interrupts, “and strip all the berries off the bushes before she gets there.”

“I can’t do that. All the other women will think I’m trying to cheat them out of their share. I just can’t believe how she’s just gotten so full of herself since…”

Charlie starts to nod off, sitting by the warm fire.

“Hummf, I’m listening already. Can’t we eat while you talk?”

Georgette dishes up some stew for him. “And I can’t believe that nobody else said anything in my de–”

Charlie jumps in. “Hey, why don’t you wear your good dress? The doeskin one that’s so soft. That’ll show her.”

Georgette glares at him for interrupting again, then her expression softens. “Actually I kinda like that idea.”

“Good, glad to help. Man you’ll never believe how far I had to chase that elk today.”

“I still can’t believe that nobody came to my defense, not even Wilma–”

“Why are we still talkin’ about this, Georgette? We solved the problem.”

“Well. I guess you just don’t care that they hurt my feelings. After all, why should my feelings matter when your feet are sore from chasing elk!”

“Hey, why are you getting mad at me?”

“Cause you never listen!”

“Hunh? What have I been doing for the last half hour?”

“Cleaning your spear and eating your dinner.”

Kissing the idea of a romp in the furs goodbye, Charlie sighs.

Are you feeling a bit sorry for Charlie about now? Or are you thinking Georgette married a dimwit? This poor couple has stumbled into one of the most common pitfalls of male-female relationships.

This pitfall is caused by a major difference between the way men and women deal with feelings and problems. Men take action; women process feelings. I’m not saying women don’t act to correct a problem; they do. But they prefer to sort out how they feel about it first, and most women like to do that by talking about the situation and their feelings out loud. And sometimes they have to repeat themselves a few times until they’ve vented sufficiently to move on to a plan of action.

Men don’t get that, because that’s not how they are programmed. Their minds jump immediately to action-oriented problem-solving. So halfway (or sooner) through the venting/sorting out feelings process, they start jumping in to suggest what the woman can DO about the problem. They are then totally mystified as to why their woman is now mad at them!

Men, on the other hand, tend to mull it over inside their own heads when they need to sort out how they feel about something. Then if they think it’s relevant to share, they’ll tell you about it. So they get real quiet when something is on their minds.

Now, women tend to be fairly sensitive to the non-verbals of emotions (I’m not making this up; research has found this to be true). The woman catches on pretty quick that something’s bothering her guy. So she asks, “What’s the matter, honey?”

And what answer does she get?

“I can tell something’s bothering you. What’s the matter?”

“Is it me? Did I do something to annoy you?”

“I said, I’m fine,” he says through gritted teeth.

Now she is totally convinced that he’s mad at her, and he is, because she’s not leaving him alone to sort things out. John Gray, in his book, Men Are from Mars, Women Are From Venus, talks about this. He shares the advice passed along by a woman who attended one of his workshops. She said her grandmother had told her, “When a man withdraws into his cave, do not try to follow him, or you will be burned by the fire from the dragon that lives in that cave.”

Does any of this ring a bell for you? Have you ever been burned by the dragon fire? Any fun, or serious, stories to share about venters vs. mullers? Or maybe you know of some exceptions to the rule?

Our November Contest and Other Off-Week Goodies

Why Is the Divorce Rate So Low?