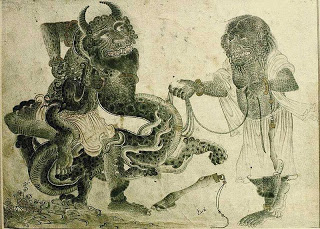 “A daimon is something which is imaginary and real at the same time – a construct of the human mind.”
— Riga Hayworth
The concept of the daimon is tricky.  Look it up online, and you’ll most likely be routed to a bunch of sites on demons.  Traditionally, daimons are defined as the entire pantheon of supernatural entities, which act as intermediaries between our world and the otherworld.  Fairies, angels, ghosts, lake monsters, demons…  all may be classified as daimons.
The bigger question, and one Riga Hayworth struggles with in The Alchemical Detective, is what aredaimons?  Where do they come from?
In his writings on UFOs, Carl Jung theorized daimons were either objects manifested or projected by our unconscious, or real objects that people projected their unconscious content upon.  But in any case, they were both real and imaginary at the same time.
If this sounds impossible, then consider quantum mechanics, and the theory of quantum superposition.  It holds that electrons exist partly in all their theoretically possible, i.e. imaginary states, at once, but when observed, they appear in one state… the expected one.  If quantum theory holds true, the very building blocks of life are both imaginary and real.
Riga’s no scientist – she’s a metaphysical detective, and in The Alchemical Detective, she encounters daimons and demons that pack very real punches.  As a metaphysical detective, Riga seeks paranormal first causes, the why behind the what.  She knows there’s something out there beyond ourselves, and she wants to understand it, but she knows that at some level, a complete understanding is impossible.  Mystery is inherent in the daimonic realm, and the harder we look for answers, the more quickly they slip from our grasp.
About the Author:
Kirsten Weiss is the author of two paranormal mysteries available on the Kindle: the urban fantasy, The Metaphysical Detective, andThe Alchemical Detective.  She is hard at work on the sequel, The Shamanic Detective.
Kirsten worked overseas for nearly fourteen years, in the fringes of the former USSR and deep in the Afghan war zone.  Her experiences abroad not only gave her glimpses into the darker side of human nature, but also sparked an interest in the effects of mysticism and mythology, and how both are woven into our daily lives.
Now based in San Mateo, CA, she writes paranormal mysteries, blending her experiences and imagination to create a vivid world of magic and mayhem.
Kirsten has never met a dessert she didn’t like, and her guilty pleasures are watching Ghost Whisperer reruns and drinking good wine.
Read a sample chapter of her books or check out her blog at http://kirstenweiss.com.  You can follow her on Twitter at https://twitter.com/#!/RigaHayworth

4 thoughts on “Diamons and Demons”